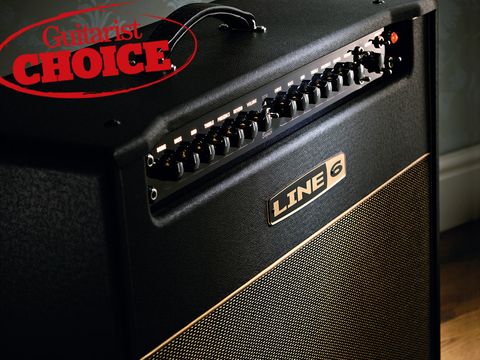 Line 6 has had previous forays into combining its amp modelling technology with valves in the Spider Valve amps, designed in collaboration with Reinhold Bogner. That collaboration has now created the new flagship HD50 amp.

Where the Spider Valve series modelled both the pre- and power amp sections then ran that through an output valve stage, the DT50 offers a more integrated system, effectively mating the digital preamp and tone stack with an analogue power amp.

It combines Line 6's recently introduced HD modelling with a twin-channel valve-powered amp complete with two 12AX7s and a pair of EL34s and is designed to offer plenty of sonic flexibility.

"The DT50 combines Line 6's recently introduced HD modelling with a twin-channel valve amp complete with two 12AX7s and a pair of EL34s."

The thinking is that there are four voices upon which all classic amps are based - American Clean (Fender), English Crunch (Marshall), English Chime (Vox) and Modern High Gain (Mesa Boogie).

These four voicings (I, II, III and IV) are selected via a four-way switch and created by a combination of digital modelling and analogue circuitry - the negative feedback loop topology, which is the amount of the amp's output fed back into the amp (higher NFL levels reduce distortion and increase headroom), is different for each voicing.

In addition to choosing one of the four you have two more switches to configure how the power valves operate, with a choice of class A (25 watts, cathode biased) or class AB (50 watts, fixed biased) operation and Pentode or Triode mode.

There are 16 combinations available in all, any one of which can be dialled in for either of the DT50's two identical channels. Tailoring the sound is carried out with each channel's drive, bass, mid, treble, presence, reverb and channel volume knobs.

Foot control to switch between the two channels can be implemented via a standard footswitch, but owners of the Line 6 M9 and M13 Stompbox Modellers can control the amp via MIDI.

If you want to run the DT50 at low levels, perhaps for home practice, there's a low volume mode initiated by pulling out the master volume knob. This lets the HD modelling technology provide both preamp and power amp tones for a fully overdriven sound if desired, but still feeds the signal through the output valves, working in much the same way as the Spider Valve amps.

For quiet recording the DT50 also provides a direct output featuring cabinet simulation via an XLR connection. The DT50 comes in a head version (with optional 4 x 12 cab) or a choice of two combos, a 1 x 12 or the 2 x 12 we have here.

The 112 features a Celestion G12H90 speaker while the 212 combines one of those with a Celestion Vintage 30 - offering different tonal options when it comes to close mic'ing. The 4 x 12 cab offers two of each.

First thoughts on the DT50 212, which is about three inches taller than an AC30, are that it's a weighty beast given its single handle, and it's not fitted with castors either.

The front panel is neatly backlit so you can easily see which options you've chosen. It's a WYSIWYG operation, so you simply select a channel and set the knobs and switches as you want. The switches toggle between their settings with the actual switching done by relays rather than by physical position of the switch, so changing channels recalls the options that were set by the switches when the channel was last active.

The dual-channel set-up offers plenty of flexibility as you can have a completely different amp voicing for each channel or set it to operate like a conventional two-channel amp, with the same basic sound but different amounts of gain. However, if you're footswitching between channels set with different pentode/triode settings and/or A/AB settings there's a time lag.

Each of the four voicings has a recommended setting for the operating class and pentode/triode option to more accurately emulate the amp it was based on. All are designed to run in class AB, apart from voicing III, the English chime, where the recommended class A operation tallies with how a real AC30 works.

Side-by-side with our vintage AC30, the DT50 sounds pretty damn close to the real thing, as do the other three voicings. With the modelling and different NFL settings, each voicing is quite distinct from the next, giving you access to the sonic signatures of a nice clean Fender, a sixties Marshall and the saturation and low-end grunt of a high-gain Rectifier.

While that may seem like no big deal, as you'd usually find all four in any modelling amp, these are pretty accurate renditions implemented in a way that provides a very natural playing experience.

What's more, you can change the feel and tone by altering the way the valves work; using different A/AB and triode/pentode settings from those normally associated with the amp that the voicing represents can give you some cool hybrids.

Switching from AB to A gives a more dynamic feel and an increase in distortion, while triode offers a lower output and a more rounded sound with less top end than the clearer pentode mode with its greater headroom. Plenty of scope for dialling in a sound that's right for you then, even more so if you add one of the HD PODs to create an integrated rig.

There are probably quite a few guitarists out there who aren't convinced that digital modelling in an amp is a great idea, but the DT50 may be the amp that will make you reconsider. The DT50 feels and sounds pretty much the same as an all-valve design - the digital elements of the amp are so fully integrated and seamlessly intertwined with the analogue that the impression is that what you're hearing is a valve amp that gets a little tonal flavouring from digital, rather than a modelling amp that's using a valve stage to 'warm up' the sound.

The digital-versus-analogue debate aside, though, what you're getting here is a very versatile amp indeed - plenty loud enough for any gig and with useful facilities for recording and home practice.

Perhaps more importantly, though, it can deliver the four distinct flavours that are generally regarded as the cornerstones of guitar tone. While not every guitarist has a yearning to own several amps, we'd wager that Fender, Marshall, Vox and Mesa/Boogie would be on the shopping list of those that do, and the DT50 is currently the closest you'll get in a single amp to emulating all four.

Now listen to our audio demos to hear the DT50 in action: