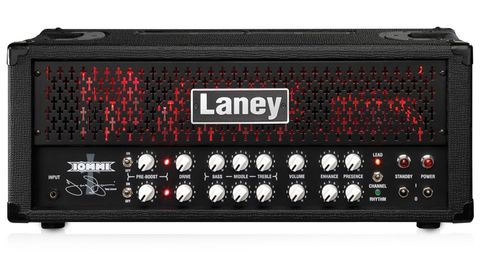 If all you want to do is give it the full metal beans while perfecting your use of the 'diabolus in musica', you'll need a crowbar to wipe the ridiculous grin off your chops.

The TI100 is the second signature amp from Laney for Tony Iommi. The first was the GH100S, which was a hooligan of the highest order, with a barking, aggressive mid-heavy tone.

Whether Black Sabbath tickle your musical taste or not, there's no escaping the influence the man in black holds over the world of metal. A veritable dictionary of riffology, he's been banging out evil licks forever, so it's pretty much a given that he knows what he needs from an amplifier.

The new TI100 certainly looks the part - its matt-black front features cross cutouts, which light up with a red glow when fired up. When we dial in our usual amp settings, though, we're in for a bit of a shock. We expected heavy, but the sheer levels of bass and gain on tap here are simply outrageous - time to reel this bad boy in.

The clean channel is actually a little bit of a misnomer, because, with the guitar's volume wide open, what you get is more of an AC/DC crunch. Dial it back a little, and the clean sounds on tap are really quite good; they're crisp enough, and certainly suitable for a nice arpeggiated intro before you slip your aggro boots on.

When you wind up the gain on the rhythm channel, you might be surprised to find that vintage Sabbath tones aren't really on this amp's agenda. Instead, you get a much more modern and aggressive grind that sits more comfortably with Iommi's current sounds. Max out the gain, and the amp seems like it's struggling to contain the beast within.

Indeed, if you add the preamp boost into the equation, it's easy to overwhelm the preamp completely, which results in a flatulent, rumbling interruption to your playing. It sounds as if the amp is eating its own innards at the most extreme levels, and we can't help but think that Laney could have simply lowered the upper limits to keep the amp usable throughout its entire gain range.

"Some folk have wondered if the TI100 is just a warmed-over Ironheart, but it turns out that the Ironhearts were actually spawned from the development of Iommi's TI100"

The lead channel gives you even more filth, but if you rein it in a little you'll find a sweet middle ground with a huge amount of grunt but enough definition to craft a cracking lead tone. It's beautifully saturated and almost processed in feel, inviting you to shred as fast as your fingers will allow, and making legato playing an absolute joy.

Some folk have wondered if the TI100 is just a warmed-over Ironheart, but it turns out that the Ironhearts were actually spawned from the development of Iommi's TI100. However, the key difference is that the TI100 is far more focused in nature, and completely dedicated to sonic carnage.