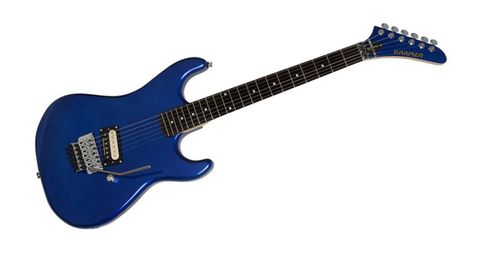 If you're in the market for an unashamedly rawk guitar, then Kramer is certainly worthy of your wallet's attention.

Those of you under 30 probably won't remember Kramer in its heyday. If you grew up in the mid-80s, however, their guitars were the stuff of dreams for anyone listening to Van Halen, Mötley Crüe and the like.

This reviewer recalls regularly visiting his local music shop just to drool over the Kramer Nightswan they had on display in a glass cabinet. Unfortunately, you had to look as if you owned £2,000 before the shop would even contemplate taking it out of its see-through home.

Kramer's emergence in the market was influenced by its first major endorsee, a Mr Edward Van Halen, whose work developing his signature model apparently resulted in the creation of the Baretta.

By the early-90s, however, pointy rock guitars became the scourge of rock music. A pair of elephantine balls was required for you to even consider playing a solo back then, and flashy guitars like Kramer's were soon consigned to history.

However, thanks to the likes of Steel Panther, glam rock has seen a resurgence of late, so creeping out of the closet of yesteryear we have this Kramer Baretta, at a reasonable £519.

The Baretta doesn't feel particularly light (no doubt thanks to its maple body), but strapped on, it feels comfortable.

The neck is a very rounded C shape and not the wafer-thin profile sometimes associated with shred guitars, and the fairly flat 356mm (14-inch) radius permits the hugest of bends without fear of fretting out.

But while the stark look of a one-pickup guitar doesn't inspire much hope of sonic versatility, the least you would expect is a great rock tone - and this doesn't disappoint.

The maple body, in conjunction with the mid-rich Seymour Duncan JB, delivers a scything tone that would cut through any mix. Often, we'd reach for the tone control to tame the highs, only to remember there isn't one!

Tone adjustments must be made using your amp, although the sonic palette can be broadened by rolling off the volume or simply altering where you pick the strings.

And by activating the coil-tap, you also have some very usable single coil-type tones - although again, you may find yourself reaching for that missing tone knob.

There is a lot of competition for rock guitars at this price point, and a number of other shred-friendly brands have emerged while Kramer lay dormant.

In comparison to those, the vintage-correct features on the Kramer, such as the 80s-style Floyd Rose, may look ancient (note: these early Floyd Rose units are still very much admired - check out Vai and Satriani's live guitars for confirmation), but they're still as relevant in today's guitar climate as they ever were.