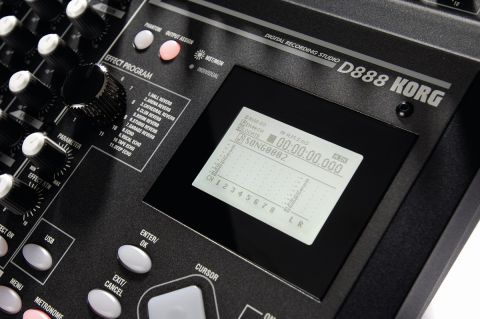 If you´re looking for a multitracker that you can plug a guitar straight into and get a fully produced sound from the onboard amp simulation insert effects, then perhaps you need to look elsewhere. On the other hand, if you already have a POD or similar, an amp with a decent speaker-emulated output, or you just like to put a mic on your speaker cab, then the D888 will reward you with high-quality eight-track recording and mixing, while still being very easy to use. Although the D888 can be used by the solo songwriter or guitarist for collating ideas, putting tracks together and making demos at home, its real practical virtue is that it´s tailor-made for anyone who likes to record band rehearsals and gigs. The fact that you can record eight tracks simultaneously while the D888 is in-line with a larger system, still allowing the signal to go to a PA, makes it a great location recorder. Any band rehearsal or gig can be taken home and worked on, whether that means adding overdubs or just mixing as is on the D888, and the machine is more than capable of producing good results. However, if you´re looking for a more sophisticated production based on what you´ve recorded live, then it´s a straightforward operation to transfer the D888 audio as WAV files to a computer-based system and take it from there. It´s a great tool for, say, recording live drums to form the basis of a song to be built up on a computer. While the D888 might have initially appeared to be lacking in features compared to some of the competition, what it has got is extremely well implemented, and its practical nature will hit the nail squarely on the head for many users.

Over the last few years, as each manufacturer has vied to provide more bang for the buck, we´ve seen lots of digital studios packed full of features like drum machines and amp simulation. So it may seem strange that Korg has taken a back-to-basics approach with its new multitracker - there´s not a whiff of drum rhythms or amp simulation.

What´s more, there isn´t even the ubiquitous Hi-Z input for plugging a guitar in. So what gives? Looking at the D888 for the first time, you might get the impression that you´re looking at a conventional analogue mixing desk, rather than a digital studio. Unusually for a digital machine, each of the eight channels has a set of dedicated knobs for input gain, EQ, effects send and pan, so you can reach down, grab and tweak, rather than having to select channel and function before turning the single knob that does the job for all the channels: another unusual feature at this price point is the provision of individual jack outputs for each channel.

The penny drops when you realise that the D888 can actually double as a mixing desk. The eight input channels can take the signal from a microphone through an XLR socket (phantom power is globally switchable for condenser mics) or from a 6.4mm jack. The signal from all eight channels can be recorded simultaneously to eight separate tracks, but it can also be sent out of the mixer section via the eight 6.4mm jack outputs. These can be configured with a single button press to be individual outputs for each channel.

Eight tracks can be played back simultaneously with the D888, but it supports a reservoir of 64 virtual tracks - so there´s ample opportunity to record different versions of any particular solo and use the best one as the playback track. Recordings are stored on an internal 40GB hard drive at uncompressed CD quality (16-bit, 44.1kHz) and the recordings are stored as WAV files, rather than any proprietary format, making easy work of swapping files to a computer. A USB 2.0 socket is provided on the D888 rear panel for this, while the entire D888 hard drive shows up as a mounted disk on your computer desktop. While there are no insert effects that can be added to the signal as it is being recorded, there is three-band EQ so sounds can be tweaked on the way in. The EQ will also make a contribution to any recorded tracks when bouncing or mixing down.

Crucial to any guitarist who needs to keep their hands on their instrument, the D888 supports hands-free recording either via a footswitch (not supplied) or by programming edit points for automatically punching in and out. Once the audio is recorded, there are various non-destructive editing tools that allow you to copy entire sections of the song, swap tracks, erase and so on.

There are also Undo and Redo commands that enable you to hear both the before and after versions of any edit before you commit to any permanent changes. To free up space and build bigger arrangements, tracks can be bounced down to single track, or in stereo to a pair of tracks. Mixdown can take place internally to a stereo master track and the D888 can record up to eight different stereo mixes of any song. EQ and panning are important tools at mixdown, but there´s also an onboard effects processor that allows one of 11 different reverbs and echoes (which are selected with a dedicated rotary knob) to be added via the effects sends knobs on each channel. A global return knob allows you to set just the right mix. Effects parameters are editable from a dedicated front panel knob.

Getting started with the D888 is easy enough - it´s all nicely laid out and clearly labelled, and there are dedicated buttons and knobs for most functions, so getting bogged down in deep menus isn´t an issue. For the functions when you do have to get into the menus, you´ll be close enough to the display to see it, and at that distance, it´s adequate. Although clear, however, it is rather small and would perhaps have benefitted from being tiltable like on some of the other Korgs. The sound through both the XLR and jack inputs is clear and precise - there are certainly decent quality input amps and digital converters at work here, making sure that the signal you put in remains pristine. Editing audio, track bouncing and the like are fairly straightforward processes and it doesn´t take long before you can navigate all the controls with speed.

For anyone who needs a timing reference, a built-in metronome provides a steady rhythm, but the D888 can also output MIDI Time Code (MTC) to synchronise an external computer-based sequencer or a drum machine. Apart from the metronome, the only ‘sounds´ that the D888 can claim as its own are the effects, which are reasonable-quality ambience sounds. The reverb and echo, when applied to the dry recorded tracks, ties all the elements together with a sense of space, and this can help gel what´s recorded into a coherent mix. Likewise, although the EQ controls are fairly basic cut and boosts at a fixed frequency, there´s plenty of control where you need it most.