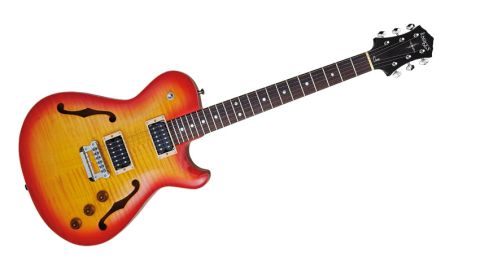 If your interests lie on the jazzier side of the tracks, this guitar will take you there. Mature in sound and style.

Irrelevant of its outline, and the fact that ex-PRS luthier Joe Knaggs only founded his firm in 2009, the Knaggs Chena Tier 3 guitar is imbued with tradition.

If we had to put a name to the guitar from feeling the neck alone, we'd say late 50s Gibson. The weight suggests an ES-125 or early ES-335 - the size, something a little more contemporary...

PRS's Singlecut Hollowbody, perhaps? But its less rounded lower bout is more Fender-y, while the faux edge binding and medium flame reference PRS... but why wouldn't they?

There's no hint of modernism to the headstock - it's simply beautifully understated, like the guitar. It also doesn't look 'perfect'; the finish isn't mirror- shiny, and you can see the grain in places. It looks a little old, a little experienced.

But it looks to the future in many ways - not least the construction. Like the PRS Hollowbody design, the sides and inside carve of the back are cut from a solid one-piece slab of mahogany.

The arched top is carved separately, then joined to the body to seal the form. Here, though, the back is thicker, which allows a rear belly cut, plus, viewed from the side, the whole thing tapers in thickness - it's thickest at the base - and the back is slightly concave, too.

There's no centre block, but the top and back are connected by a block that sits underneath the bridge. The scale length adheres to classic Gibson, as does the neck-to- body join, just past the 16th fret - pretty close to a Les Paul.

Then there's the bridge and tailpiece assembly, which is basically a tune-o-matic-style bridge that sits over the protruding 'legs' of the tailpiece, creating a one-piece assembly that Knaggs believes drives the string vibrations more efficiently into the body.

Electronics are simple: twin Seymour Duncan '59 uncovered humbuckers, shoulder-placed toggle selector switch, but only three controls: two volumes and master tone. It's a superb instrument that draws from history to create a very forward-looking design, which looks and feels like it could have been made in the 50s or 60s.

Even before we plug in, there's a profound old-Gibson-semi tonality to the Chena: that slightly honky resonance, trim bass and clear but smooth high-end. The Chena's neck not only feels sizeable, dimensionally, but the string spacing seems broad, too, whereas small frets add to an older-style feel.

Plugged in, there's almost a reversal of the acoustic tonality. The Chena sounds like a whole heap of Gibson-style thinlines. It's a little more open, less 'solidbody' than an ES-335 - more like an ES-330, perhaps. At lower volumes, nailing older jazz styles is easy. The tone control becomes the 'style' control - that shoulder-placed three-way makes pickup changes really easy, especially when playing seated. The sounds are balanced, and the neck pickup is wonderfully full and vocal.

The guitar works particularly well with louder, rockier or dirty blues tones, if that's more where you lean, and those beautiful on-the-edge- of-musical-feedback tones are easily achieved. The Chena also has bucket-loads of solidbody-like snap and sparkle.

Tonally, it's quite superb. It's a bluesy, poppy, 'solidbody' sounding semi, but still with all the openness, expression and dynamics of a good thinline. In that regard, it's pretty versatile. Truly awesome.