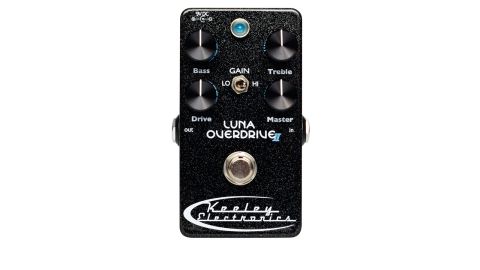 It will do blues, no problem, but the extra edge, bite and distortion means it can cover more, placing it undoubtedly among the best sounding distorto-drivers we've heard, well, ever.

Robert Keeley is the former electronics teacher who came to prominence in the early 2000s via his tone-improving modifications to famous pedals, notably the Ibanez Tube Screamer. Keeley's ambition for the Luna is bigger than his previous offerings, stating that it's "the sum of my ideas and thoughts on overdrive and distortion," aiming to offer "endless tonal possibilities".

Thus, between the op-amp-driven input stage (as found on early Tube Screamers) and discrete FET output stage, you get a modified Baxandall tone circuit, via separate bass and treble pots.

Their position not only has a huge effect on the perceived midrange response, but also affects the character and level of the drive significantly.

You also get 'lo' and 'hi' modes courtesy of the mini toggle switch and, just for the record, true-bypass switching.

With a Keeley 'Mod Plus' TS-808 on hand for a direct A/B, the Luna can approximate those mid-rich TS-type tones, but there's so much more, including immense level that can force your amp's input stage into submission.

The dual EQ offers huge potential for tonal shaping, not to mention the character of the gain, which ranges from softer and smoother, through to more edgy distortion with an almost fuzzy quality at times.

It's that extra edge that makes the Luna really compelling, adding a little vintage Marshall-type grit to a predominantly Fender-type setup; we'd play Hendrix, Eric Johnson and Michael Landau stuff using this pedal all day. Try it with an SG, too: heaven.

The Luna will certainly appeal to those of a more rocking bent. There are a bewildering number of 'boutique' effects brands, so it's with some sense of relief we find Robert Keeley still evolving, still making superb pedals.