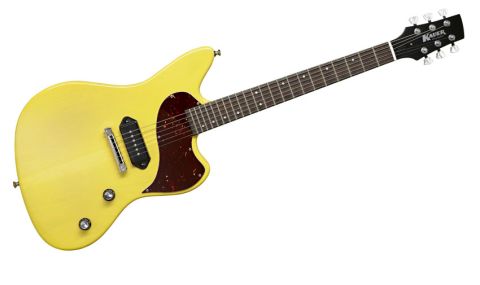 Here's a great looking US-built player's guitar at a fair and competitive price. Try one.

On a visit to Tone World in Manchester, we came across guitars made by Doug Kauer in California. Doug began full-time guitar manufacture about five years ago, having spent years doing high-end woodwork and building hot rods and racing cars. "The two kind of melded together," he says.

It's a virtually one-man operation with only one other luthier (Paul Rhoney) in what Doug describes as a "co-operative", plus a few of part-time helpers. Kauer builds three main model lines: the Daylighter/Argonaut, the Banshee and the Starliner.

The Daylighter JR is his most basic, but with it he's created a great-looking cross between a Jazzmaster, a non-reverse Firebird I and Les Paul Junior. Ours even comes in TV Yellow; it really looks the part.

Body and neck are Spanish cedar. But isn't that what some acoustic guitar tops are made of? "No, Spanish cedar is actually a South American mahogany that's horribly misnamed," Kauer clarifies.

"It's a close relative of Honduran mahogany but has a cedar-like oil and smell, hence the name. It has mahogany's great tonal qualities, though, while being lightweight and lively. If you could cross swamp ash and mahogany, that's Spanish cedar."

Fingerboard material is wenge, which we've often seen on high-end basses such as those built by Warwick, but less frequently on six-string instruments. "Wenge is an extremely stable rosewood variant, and very pleasant to work with," says Kauer.

"Plus it's abundant and not currently in danger of ending up on CITES' list. Spanish cedar, too, has relatively low usage in commercial woodworking, so is in much lower demand than other woods - I buy up everything I can get."

The 'board is dark, grainy and extremely hard, while in this TV Yellow finish, the Spanish cedar's grain is not unlike that of korina - as famously used on Gibson Flying Vs and Explorers. The smooth gloss finish is a urethane chosen for its thinness of skin and a sonic transparency not unlike that of nitrocellulose.

It's not perfect, but it's certainly up to Gibson standards, and, in fact, the more organic look suits a working guitar like this better than, say, the flawless mirror of a Collings or Suhr. You wouldn't be afraid to take the Daylighter out on a sweaty pub gig and bash the, er... living 'daylights' out of it!

Tuners are open-back pearl-buttoned Sperzel Sound-Lok. We think they are among the prettiest 'heads out there - sort of like electric guitar versions of the Waverlys found on posh acoustics, such as Martin and Collings. Being non-enclosed means they are light in weight and less likely to rob the guitar of sustain. The bridge follows suit in that it's a simple but similarly sound-friendly TonePros vintage wraparound.

The single pickup is made for Kauer by Wolfetone of Washington state and based on that company's Meaner single coil, which Kauer believes is "about the best dog-ear P-90 on the planet". He tells us they have been voiced specifically for Kauer guitars:

"I wanted a bridge pickup that's hot enough to drive most amps but not so hot that it gets nasal," he elaborates. A neat option on this guitar is a push-pull tone pot that brings in a second tone circuit - "a pseudo 'cocked wah' tone" - which gives an extra voice to this seemingly simple setup. Doug agrees that this is not unlike the similarly cool arrangement on the one-pickup Fender Esquire.

For a pretty big guitar, the Daylighter feels light on a strap, is well balanced and sits in a natural position, so the frets are where you expect them. Access is total, and the neck has no big personality to stamp on you - it's a well-formed C-section with a Gibson-like 305mm (12-inch) fingerboard radius that lets you get on with business.

The fret job is as good as it gets, so all the usual bluesy rock techniques fall delightfully under the fingers. However, as we've seen a few players of this guitar do, you could easily jack up the action and employ this as your Sunday Best slide guitar.

Plugging into a small valve combo, the guitar's character becomes immediately clear. The earthy P-90-type tones are strong and neutral when clean - strum an open C chord and it's instant Dave Davies on songs such as Dedicated Follower Of Fashion - but with overdrive, things warm up considerably.

It's dark but resonant. Slower leads, or riffs and doublestops sing out musically, while that bottleneck - with judicious added delay - is pure heaven, especially with the pot pulled to engage the more 'vocal' second tone circuit. This is a 'heavy blues' axe of mighty proportions, and in the hands of a Leslie West or Pat Travers would be a sonic dream. Kauer is dead right when he says it has an "old wood" sound.

It's great to discover a guitar brand with which we weren't overly familiar, that looks really great and delivers the sonic goods, too. Doug Kauer is more than happy to nod to his illustrious forbears, but points out that the Daylighter is no 'tracing paper special'.

"I wanted to combine my love of Gibson Firebirds - their great fingerboard access and playing position - with my love of the Fender Jaguar and Jazzmaster shape," he explains. "But the Daylighter is not a straight Fender offset body copy; it has been rescaled and tweaked to fit our needs."

It looks great, and lends its player the identity of someone happy to stand out from the crowd. It's not perfect in every department, but it's very well priced for a handmade American guitar. And as far as we're concerned, the fact that's it's more like a Gibson and less like some of those American boutique brands means it will actually be taken out and used to make music, and not sit in a glass case to be admired.

The Kauer punches well above its weight in looks, tone and, let's be honest, out- and-out cool. We love it!