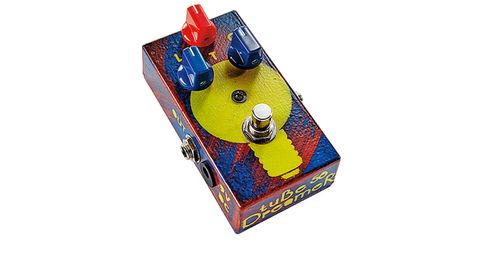 JAM has four different versions of the Tubedreamer in its range. All are based on the Tube Screamer but vary in their circuitry to produce a different tonal response.

This TD58's variation is that it uses the JRC4558D chip, as in the original TS808, but has three diodes for asymmetrical clipping instead of symmetrical.

The TD58's control knobs have largely the same range as a vintage TS808 and the sound naturally has a little extra added in the midrange area to help its prominence in a mix.

What you are getting is a natural amp-like overdrive that responds really well to picking dynamics and is endowed with plenty of clarity so that every note in a chord rings true.

It's a great asset in front of any valve amp, adding a natural leg-up whether you want a lead sound to complement your clean or to get a driven amp to sing.

Everybody's doing one these days, but as Tube Screamer-style pedals go, this is one of the best we have played through.