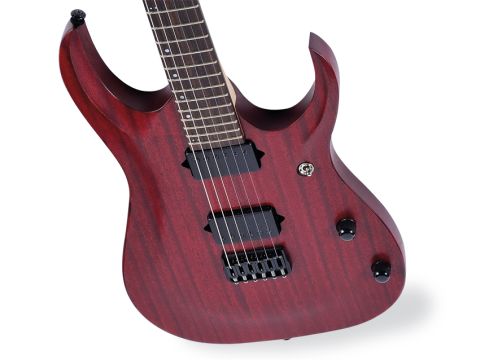 Jayden Rose's core demographic might be seven and eight-string players, but in the crowded shred-machine market the Tachyon is a genuine contender.

Its name might be unfamiliar to all but those guitarists ensconced in the progressive metal scene, where Jaden Rose and his brand have built a rep for its complement of seven and eight-string guitars.

But it's only a matter of time before the market en masse turns its attentions to the superlative work of this UK bespoke luthier. It's all about the wood for Jaden Rose - you could picture him wandering like Ray Mears through a remote forest, stripping bark and sniffing the wood underneath as he sources the raw materials.

"With an all-DiMarzio pairing of a ToneZone humbucker in the bridge and Air Norton in the neck, there's no way the Tachyon could sound anything other than jaw-dropping."

Here he has plumped for sapele for the body, chosen for its bright character. But it sure weighs a ton.

With a rock maple and sapele laminated mahogany neck bolted onto the body, the Tachyon6 is a real lump. It feels weird, with an open-grain finish more reminiscent of a rather lovely chest of drawers than a guitar, giving the body a sort of naked look. But then it's got to be all about the tone, right?

With an all-DiMarzio pairing of a ToneZone humbucker in the bridge and Air Norton in the neck, there's no way the Tachyon could sound anything other than jaw-dropping. If the open-grain finish fails to woo your eyes it should win over your ears with little trouble; the Tachyon is warm, human and hugely compelling.

You can order a Tachyon with Crunch Lab/LiquiFire or DiMarzio Dominion Mark Morton signature humbuckers, but the ToneZone/Air Norton combo would take some beating, and it's perfect for funk, jazz and blues as well as raw-meat metal riffing and searing hot lead guitar.

Other super-smart features include a jack socket that points upwards, keeping the health of your cables in mind as you tuck it inside your strap, and the choice of Hipshot locking tuners affords the Tachyon great tuning stability.