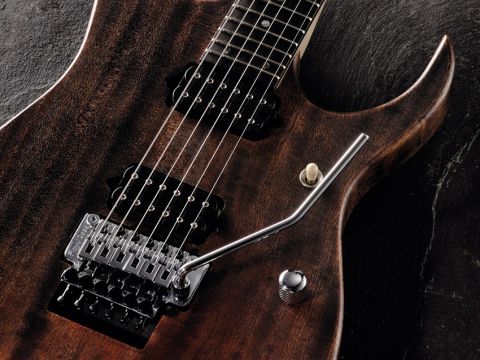 Fair play to Jaden Rose, the Series 2 retains the quality of the Original Series but ditches the bling and most of the custom options at a price that's daringly tempting.

2010 was a busy year for Jaden Rose and his team. For one, in November he introduced the new Series 2 range, which sits below his Original Series guitars in both price and degree of customisation available.

"Firstly we wanted to make great UK-made guitars, they were the Original series - made to order and customisable to a large degree," he explains. "The Series 2 guitars are very sturdy, almost workmanlike and utilitarian instruments."

The guitars are still made in the UK but costs are trimmed "by clever batch building in numbers of 10-25 at a time by the Jaden Rose Guitars team."

It's here that Rose's engineering background comes into play. By making heavy use of CNC manufacturing, "I can make all chassis parts interchangeable and modular - all necks fit on all bodies and so on.

"The Series 2 guitars also have very few options. There's a DiMarzio upgrade package available, because all DiMarzio pickups and parts are direct-fit replacements for our standard parts.

"Needless to say, this cuts down on the amount of administration each guitar requires. This, and bulk purchasing of the quality raw materials for the most important part of the guitar [the chassis itself] means that we're able to produce these at lower starting prices."

Indeed the cost reduction is impressive. The start prices for the Series 2 models - six- and seven-string hardtails at £899 and £949 respectively and £999 for the Floyd Rose-equipped model - cut over 50 per cent off the price of even the most basic Original Series guitar.

If you're looking for a sumptuously figured wood guitar then you'll need to look elsewhere, as we agree with Rose that these guitars are workmanlike and utilitarian. This may be part of the cost-cutting design principles, but it also fits perfectly with these austere times.

The same clearly Ibanez RG-inspired body outline is retained, while the body here and on all the Series 2 instruments is sapele (a lower cost alternative to mahogany), centre-jointed and, as we've come to expect from Jaden Rose, immaculately machined.

Whereas the Original Series guitars have rather sharp body edges, here a small radius is applied, which makes a big difference to the comfort factor. These are all slab-bodied save for the rear tummy cut and nicely graduated forearm chamfer.

The distressed black stain, oil and wax finish suits the vibe - it may only be a production prototype but it looks like it's been gigged, albeit without the dings!

Four offset screws, in flush recessed washers, very firmly hold the maple neck (splice jointed under the third fret) to the body on a round-nosed heel. Thanks to the cutaways, access to the entire 24-fret rosewood fingerboard is extremely easy, as it should be on a guitar of this style.

Also in keeping with style the neck is pretty skinny in depth (18.2mm at the first fret, 20.9mm at the 12th) with a flattish-backed 'D' profile. You have a choice of frets and here we have a choice of frets and here have Dunlop 6105 wire; slightly taller and narrower (approx 2.3mm wide x 1.4mm high) than the standard Dunlop 6100, it can, when correctly crowned, produce slightly more accurate intonation.

Chrome-plated Gotoh tuners are another option, but the Floyd Rose Special vibrato and locking nut are the standard spec for the Series 2 guitars. The Korean-made Special is Floyd Rose's own version of the numerous licensed designs out there.

It "maintains the construction parameters and features of an Original Floyd Rose, while utilising zinc alloy saddles in place of steel and a zinc alloy sustain block in place of brass," says the company.

While the Original Series offers various DiMarzio pickups (they're optional here too) the standard Series 2 pickups are ceramic-loaded with a more metal sonic intention; an Alnico V option is aimed more at classic rock sounds.

"They are made in Korea by the same guys that make for lots of other manufacturers," says Rose. The two open-coiled 'buckers are controlled by a three-way toggle selector, master volume and tone with knurled metal control knobs.

The output jack is securely mounted on the guitar's side on a thick chromed metal plate. All in all a tidy job: no frills, no fuss.

With a Floyd Rose onboard and one of the lowest, slinkiest actions we can remember for a good few years, the sonic intention of this guitar is very clear. Put it this way, if you're looking for old-style, big, clean-to-crunch blues and Americana-style tones this is the wrong guitar.

To be fair, however, played into a clean amp, the mixed position possess a Fender-y hollowed snap that is certainly a more than viable cleaner rhythm voice, but the solo pickups sound a little underwhelming and generally there's a lack of life and bite to these two voices.

But turn up the wick into more gained tones and this Series 2 quickly gets into its stride. There's a grinding midrange, plenty of bass and rounded highs that give it a raw, post-Van Halen souped-up, show-off rock tone from the bridge pickup and a smoother, slightly rounder tonality for higher fret excursions from the neck pickup.

We'd still prefer a slightly heavier set-up, but if old-school eighties virtuoso rock is on your radar, this guitar will do just fine.

It's a simple enough formula: strip down the specification, trim any unnecessary options or customisations and you have a no-frills guitar that centres on quality components and parts.

In a nutshell that's the Series 2. It's not forward looking in any way but, hey, we don't care. If you're into old-school metal styles it's a very good place to ply your trade: leave the bling behind and let your playing do the talking without excessive damage to your wallet. Way to go!