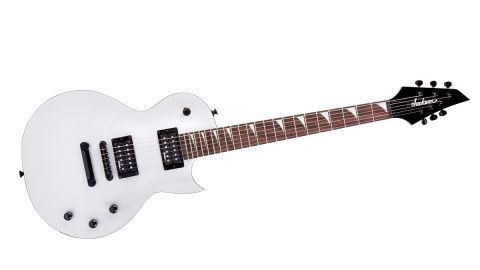 An incredibly fun guitar to play, but it might be worth saving the extra pennies for the Pro Series incarnation.

The last time Jackson made a single-cut electric was the JJP in 1997, and it was a little out of character for a company that generally courts the metal dollar.

The JJP's Les Paul Junior meets Danelectro vibe was kind of weird - where were the pointy bits?! The new Monarkh Series takes another swing at the single-cut, but the result is altogether more Jacksonian.

The Monarkh is available at three different price and spec points - the budget bolt-on-necked JS, the top-of-the-line Pro Series (£629), and in the middle is the X Series guitar we have here.

The X Series is built in Indonesia, and like the Pro Series, it has a set maple neck, a mahogany body, 22 jumbo frets and a compound radius fingerboard. It riffs on the archetypical Les Paul silhouette with a flair that's typically Jackson: the cutaway is shallower and just that bit sharper, the headstock sharper still - an oversized arrowhead you could hunt boar with.

Two high-output Jackson humbuckers are fitted in the neck and bridge, with a familiar three-way selector, two volumes and a master tone control to help find your tone. And that tone has a monstrous capability.

It comes as little surprise that this SCX Monarkh's strength doesn't lie in its clean sounds - where it performs adequately, if a little unspectacularly. But as you dial the gain up higher, it revels in its built-for-metal design - a guitar that's all id, all feral instinct, all bark.

The neck humbucker does a good job of keeping a lid on its ferocity, making high-gain leads just that little bit more precise, while the bridge humbucker lends itself to a more unruly crunch and harmonic squawk, the likes of which are necessities for metal.

Shredders of all stripes will find that - like all good Jacksons - the Monarkh flatters their playing. The jumbo frets, compound radius fingerboard and the 'Speed Neck', with its generously sculpted heel, all make for a ridiculously playable and fun guitar.

Sure, the body shape takes a little getting used to when seated and the balance a little bridge-heavy, but the Monarkh is difficult to tire of, and it's solid, too - taking a lot to throw it out of tune.

Clearly, the Monarkh is Jackson's riposte to the likes of LTD's Eclipse series and the PRS SE Standard 245, both of which ably service a similar market. And if the Eclipse is the most LP-orientated, the PRS Standard 245 the most refined, then the Monarkh is the most explicitly metal, and that's right on-brand. The bigger question is whether you can stretch to the Pro Series - with its active Seymour Duncan Blackout pickups and better finish options, that might be the more attractive option.