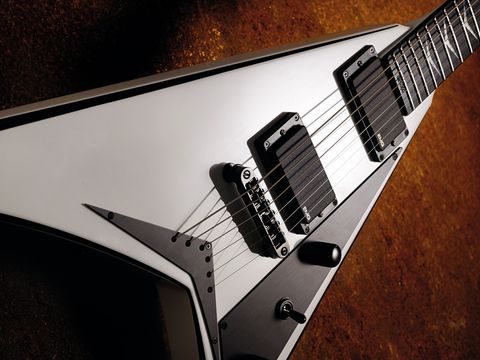 This electric guitar is brought to you in association with two shred maestros. The first is Randy Rhoads, best known as Ozzy Osbourne's late axeman and creator of the 'Flying-V-with-a-hernia' body shape that straddles the Jackson catalogue to this day.

The second is Matt Tuck, the poster-boy of Noughties UK metal with Bullet For My Valentine and a self-described "Jackson boy", who recently downed his trademark RR1T for this signature spin on Randy's blueprint.

Last year, a tantalising YouTube interview saw Tuck describe a forthcoming signature model that "is all to my spec… my own pickups, neck and machineheads". Sweet, we thought, but the result is less bespoke than mooted.

Essentially, the MTR is marked out from other RR electrics by the finish, reverse headstock and fret inlays. The thru-neck actually has a stock profile, and while no other RR combines the EMG 81/85, the ubiquity of these active 'buckers on £1,000-plus metal axes means they're hardly an exclusive.

It's also contentious that the Floyd Rose and two-octave board of, say, the RR24 have become 22 frets and a string-thru tailpiece.

So the MTR treads water as a concept. This is still a guitar you'll either really love or hate. The RR shape makes seated practice absolutely impossible, but that's OK because the body spreads its weight well and balances on a strap.

The kinked headstock means this baby could be too delicate for the road, but the compound radius board (it gets flatter as you climb it) gives you a wide, flat surface that excels for fast lead - though it feels too 'slick' for strumming.

Alder is underrated, and here it gives a rich, mid-heavy flavour, underpinned by the inherent sustain of the thru-neck and sounding far better filthy than clean. We could live without the EMG 85 at the neck; it's thick and dark, for sure, but perhaps a little woolly for Bullet-style shred when a bassist gets involved…

Enter the 81 unit: it's razor-sharp without being shrill, edgy but with sonic weight, frayed at the edges but super-precise. Whatever you think of this guitar, you can't deny that it's a searing sound for modern rock leads.

A little more individuality would've been nice. Instead, this model slips quietly into the RR line-up - admittedly no bad place to be, given that these guitars still epitomise the feel and sound that Randy specified in the 80s. We like it a lot, but then we love Bullet.

If you're not a Matt Tuck fan and don't play much rhythm, try the £1,099 RR24. It might drop the neck 'bucker, but with a Floyd Rose and 24 frets, it's arguably the more rounded choice.