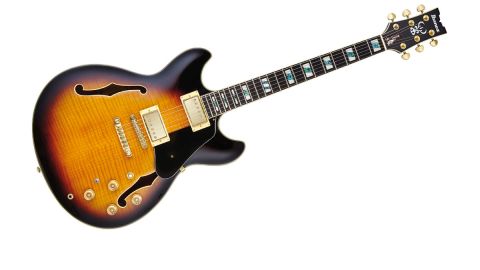 It may be endorsed by an iconic jazz-fusion player, but blues-rock guitarists will find much to love here.

Funky fusioneer John Scofield played a 1981 Ibanez AS200 for years before the two teamed up and introduced the similar JSM signature guitar to the world in 2001.

As good as the JSM is, costly signature models are out of reach for most guitarists. Thankfully, Ibanez recently introduced a lower-priced version: the JSM10, based on the JSM100. The origin is quite obvious, with the JSM10 strongly reminding us of Gibson's much-loved, centre-blocked thinline ES-335.

It certainly looks impressive in the Vintage Yellow Sunburst and the laminated flame maple is used for the whole body. With subtle arching to the top and back, the high-gloss body is a marvel to look at.

The neck is sapele with a bone nut and bound ebony fingerboard with 22 medium-gauge frets. Coupled with the slick C profile and similar radius, it's great to play. Indeed, like an ES-335, the body cutaways make for an almost SG-like experience with such easy access all the way up.

The electronics offer a three-way mini toggle Tri-Sound switch that works on the neck pickup only, offering series or parallel humbucking, plus single coil voicings.

The three-way toggle is positioned near to the treble-side f-hole and we have more standard control knobs with (again) an ES-335-like output jack position on the top of the body, not the side. Strings are lighter, too, 0.010s, and we get the ART-1 bridge with Ibanez's Quick Change III tailpiece, which makes for a subtly faster string-change experience.

Unplugged, the JSM10 is typical of so many centre-blocked semis, chime-y and bright. Plugged in (we used both a Fender Blues Junior and AER Compact 60), it's interesting to see how the Super 58 pickups get on.

Slightly down-sized from its ES-335 origins, the JSM10 feels more compact not least due to its thinner body. Its electric-like response is enhanced by that Tri-Sound switch that, aside from offering standard series wiring of the neck humbucker, offers parallel humbucking for a lower output, vibrant, brighter tone, almost like a smoother neck single coil with a little bite when digging in.

Middle position is single coil mode, which has a similar tone (and volume), albeit with increased noise. The standard series-wired humbucker, of course, is the loudest and thickest voice and at lower volumes.

Selecting the middle position on either guitars' toggle switch puts both pickups on. Depending on your amp settings and playing approach, there are appealing Les Paul/ES-335 tones to be had, as well as almost Tele-type, honky ones, too. This is especially true if you explore the parallel and single-coil options.

As for the bridge pickup, the only choice is full-on humbucker (no coil-splits included). Being a rock-biased pickup, the joys of overdrive are more realistic-sounding on the JSM10, not least because bridge-humbucker-into-a-loud-Vox AC30 is Scofield's core tone.

The JSM10 is no doubt a versatile guitar: the centre-block helps to tame feedback at loud volumes, and the neck pickup's mini switch offers very usable options that put it ahead of most other semis. The neck is a dream to play, with admirably smooth fretwork that makes playing almost effortless. If you're in the market for a reasonably priced jazz/blues-orientated guitar, this comes highly recommended indeed.