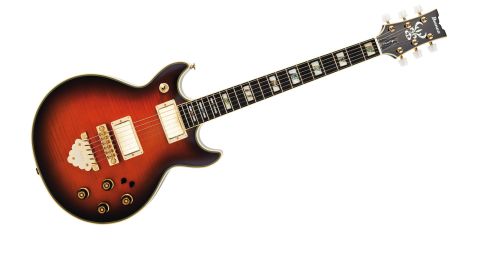 This is a viable alternative to the Gibson Les Paul, which has an authentic 70s vibe and heritage all of its own.

Long before Satch, Vai and the RG Series helped cement Ibanez in the global guitar hive mind as the go-to brand for players with a need for speed, the Hoshino Gakki-owned marque made its bones by scrapping its policy of building straight-up copies of the American classics and shifting focus towards the production of more original, less legally dicey designs. The Ibanez Artist was one such instrument.

Though it still owed plenty to the Les Paul on its emergence in the mid-1970s, much like the Yamaha SG of the same period, it possessed enough individuality to represent a viable alternative to Norlin-era Gibsons and establish a cult following in its own right.

Though a range of double-cut Artist Series instruments appeared in the Ibanez catalogue as early as 1973 - including the oddly Red Special-alike 2614 and 2615B bass - the set-neck 2617 arrived in 1975. By 1977, there were several Artist models in the range with a very similar appearance and spec to the AR2619 we have on test.

The AR2619's body is a familiar combination of mahogany with a maple cap and, in keeping with the model's 1970s roots, Ibanez has opted for a three-piece maple set neck with an ebony fingerboard.

The AR2619 features reproductions of Ibanez's 1970s Super 80 'Flying Finger' pickups, so nicknamed due to the embossed graphic on their covers.

The original units were pretty poky, bright-voiced PAF-alikes that featured on many of the company's guitars of the period, including 1977's Artist 2622, which also came loaded with an active three-band EQ. Ibanez has opted for some tricksy pickup switching in addition to the expected three-way toggle on the top horn, but more on that shortly.

This instrument is built cleanly with excellent fretwork, as you would expect from a Japanese guitar at this price point, although it has to be noted that - considering its relatively compact proportions - it's a little on the weighty side, weighing in at 4.3kg (9.5lbs).

There's no lack of resonance from it strummed acoustically, but it's something to think about if your live sets are on the long side or you suffer from back issues.

Make no mistake, despite its classic looks, this is a guitar that likes to rock. Original Artist Series models were popular with 1970s rock players, and there's more than enough attitude coming from these Super 80 humbuckers to cope both with classic rock and more modern heavy styles. Think a Les Paul with a little more bite and you are in the right ballpark.

In practice, this allows you to thin out syrupy lead sounds where more cut is required, or introduce funkier, more nasal clean tones where the push of a full 'bucker with series coils occupies too much space in a mix.

Live, we'd still favour the maximum push of each pickup's full-throated voice, but it's very useful for recording if you don't have a rack of guitars at your disposal.

The sub-boutique guitar market has never been more congested, but with 2014 Les Paul Standards hitting £2,000 there's certainly a place for an instrument such as the AR2619. It's significantly more affordable, arguably more versatile and certainly doesn't fall short in the build stakes.

If nitrocellulose lacquer and the 'right' body shape and headstock logo are important to you, then Nashville's still where it's at, but now, as in the late 1970s, there's much to recommend this Ibanez original if you are looking for a classic rock-voiced solidbody with a set neck, mahogany body and flame maple cap.