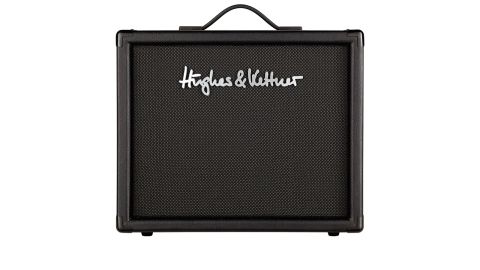 We've always found plenty to praise in H&K's TubeMeister series, and in recent years, the TubeMeister 18 has become the best-selling valve head in the USA.

To sate demand for a low-wattage giggable combo, H&K has launched the TubeMeister 18 Twelve, which includes all the features of the 18 Head with a 1x12 closed-back format, rather than the regular combo's single 10-inch speaker.

The speaker itself is a H&K-branded 60-watt Rockdriver, while the cabinet features a closed-back design, which tightens and focuses drive tones but makes the amp more directional.

Despite the increase in size, the 18 Twelve retains a seriously compact enclosure. At 15kg, it's one of the lightest amps in its class, and even comes with a soft cover to protect against wear and tear.

It is, however, one of the most heavily laden in terms of features, with two channels and switchable lead boost; power soak from 18 down to five, one or zero watts; and built-in H&K Red Box cabinet modelling.

A shared three-band EQ works across both channels, while the valve complement comprises two EL84s in the power amp and a pair of 12AX7 tubes in the preamp.

Around the rear of the amp, you'll find an XLR out for the built-in Red Box cabinet modelling, power soak control and H&K's TSC (Tube Safety Control) indicator, which monitors and readjusts the amp's bias to ensure the power valves operate reliably. A reverb control and effects loop complete the feature set.

Anyone who's tried a TubeMeister head or combo in the past will know that H&K is onto a winning formula, and the 18 Twelve is no exception.

Power it up, and the sparkling clean channel offers a neutral platform for changes in pickup and dynamics, not to mention your pedalboard, ably channelling the characters of various overdrives and distortions.

Add in a little of the subtle digital spring reverb - using the slightly annoyingly located rear control - and you have a clean for all seasons.

The cleans don't start to break up until around one o'clock on the volume control, and although the break-up tones are solid you'll get better results from switching channels.

At lower gain levels, the lead channel yields a driven sound not far off a pushed Top Boost Vox, but the H&K goes way beyond that; from open-chord crunch to searing shred leads courtesy of the lead boost, it's a seriously versatile channel.

One minor complaint lies in the shared EQ, which can prove awkward if, say, you want a darker clean tone and brighter distortion sound. But on the whole, both channels are voiced so well at 12 o'clock that it didn't bother us as much as expected.