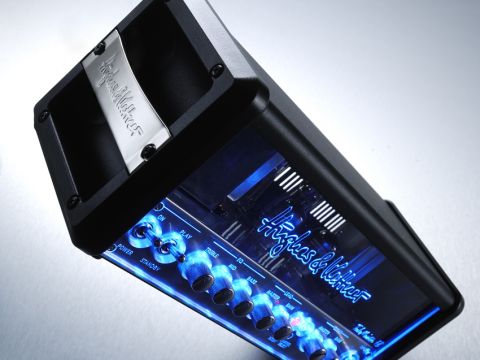 You might surmise that guitarists don't like carrying heavy boxes. Either that, or playing a 50- or 100-watt valve amp at 'patent pending' levels is no longer possible at pub, club and function gigs for the most part.

Alas, both are true and the response from the world's amp makers is a continuing flow of 'lunchbox' models that appeal as much for their diminutive dimensions as their do-it-all status: practise, gig and record - all with one or two tiny boxes.

Germany's Hughes & Kettner is certainly not first to the compact-head party but, as the Tubemeister 18 proves, it's better late than never.

Outwardly, the TM18 lives up to H&K's visual hallmarks. Pull it from the included padded carry bag and it's all smart Perspex front panel over a quality steel chassis and domed metal knobs. Power it up and it glows blue: you either like it or you don't, it seems.

The carry handles are at each end - one hand or two - and barely five kilos is bordering on laughable for a valve guitar head.

Through the Perspex, you'll see a pair of 12AX7 preamp valves and two EL84s for the class A/B, push-pull power section, flanked by hefty transformers that at least hint at a healthy shouting voice. Size isn't everything, but we've seen considerably smaller on similarly rated amps.

We get two channels, plus a boosted third mode, that collectively handle anything from clean Fender- and Vox-derived tones, Marshall-influenced crunches, right through to scooped-mid metal tones that you'd associate with the likes of Mesa/Boogie. Both the channel selection and lead boost options are footswitchable, putting three sounds at your feet.

The bass, middle and treble controls are common to both channels, though compromises are minimised because the overall response of each pot shifts depending on which channel you're in; H&K has chosen frequency bands that are complementary to each channel independently. Indeed, turn the pots while playing and they feel responsive and intuitive in use, with a wide band of adjustment available.

That's not always the case with many amps, where the tone pots often have limited effect. The Tubemeister also includes an in-built power soak, enabling you to switch down from 18 watts (full power) to either a five- or one-watt operation.

You can even switch the output section off entirely and just take it from the DI output. It's safe to unplug the speaker in the power soak's silent position only.

That DI output is in fact a Red Box, H&K's much-lauded direct output/speaker simulation device, which enables guitar players to do away with mic'ing up, and input straight to a PA or recording desk. The company has updated it significantly for inclusion in the TM18, and you use it via the balanced XLR output on the rear panel.

Combined with the speakerless output option, this all-valve head could sit on the desktop in your home studio without issue. In order to keeps costs down, the company has looked to China for the TM18's manufacture.

It seems we're happy for the Far East to build our computers, mobile devices, clothes et al, but for some reason it's still taboo in certain circles with guitar amps. Let the record show that quality issues should not be part of that judgement here.

Inside, you'll find three custom-designed, through-plated PCBs that house all the main components bar the aforementioned transformers and mains/standby switches. We've seen worse-made American-built amps than this, so clearly it isn't put together by any old factory. Getting it this well executed takes months of R&D, contact and constant feedback.

Visually, we wondered if there was enough opportunity for air circulation and cooling, but two gigs, three rehearsals and a flat-out recording session with the TM would suggest there is. Maybe the front-panel etching isn't ultimately up to the fastidious standards of the high-end German-made amps, but that's about it: no moans.

We referenced four big names above. It might be doing H&K a disservice to suggest its amps sound entirely like other marques, because there's no doubt it has its own tonal take on things.

Starting with the clean channel, there's always a sense of sparkly presence and air, and a musical rounding to the treble frequencies; these tend to be harder sounding in higher-powered classic Fenders and Marshalls.

Ultimate clean headroom/volume doesn't stand up to a Fender Hot Rod Deluxe, for example - lest we forget, lots of people find that amp 'too loud' - but if you use the guitar's volume control, it'll stay clean quite a way up.

What follows is some subtle overdrive in the vein of lighter Hendrix/SRV moments as you push the gain upwards with single-coils. Humbuckers bring more drive, of course, for a crunchy rock rhythm, but the better place for that is a footswitch tap away.

The lead channel picks up the gain boost and spans an AC/DC-style tight rock raunch through to more late-seventies master volume Marshall territory. It's worth mentioning that the mid control has a significant effect on the tone, which is particularly useful when you switch again to the lead boost mode.

Here, we're into singing, vocal-heavy gain with high mids, or scooped metal tones with mids cut and bass and treble boosted. There's no doubt it's extremely versatile, even using just the 18-watt setting, and don't be afraid to use the full rotation of those pots.

Switching down to five watts or one watt gives you more sense of the power amp at lower volumes. Increased compression, more elasticity under your fingers and less strident projection are the hallmarks, enabling you to balance pre and power section drive to get the tone and feel you like best.

You don't have the option of exploring those areas on many higher-powered amps, with the real boon here being for recording work. H&K should be applauded for the circuitry too - this isn't some trick or digital emulation, and the tonal results are obvious.

The bigger the cabinet you use, the greater the sense of space and spread from the tone is, but the designated 1 x 12 is no shrinking violet. Our favourite choice is a 2 x 12 for the increased spread. A 4 x 12, while huge fun, rather defeats the object of the teeny, tiny box.

The Red Box is invaluable on a do-it-all amp and here it's the most natural sounding direct output we've heard in a valve amp. If you love the sound of your speakers and nothing else, stick with mics, but the Red Box does an exceptional stand-in job.

For recording, we like a mix of the two - a speaker mic'd, plus the direct sound from the Red Box, which is slightly harder sounding, particularly with medium-gain tones. Middle of the night? Record silently and monitor through a computer on headphones and you're sorted.

Your ego might find this hard to hear, but your back, your wallet and the manager of your local pub gig are all singing in sweet harmony - this amp is small, affordable and loud enough to take to small gigs.

For bigger shows, there's the included Red Box out that gives a mic a very close run for its money in a live situation. That you can crank it right up at one watt at home, and record with it silently, means that this little amp means big business. Avoid it at your physical, financial and tonal peril.