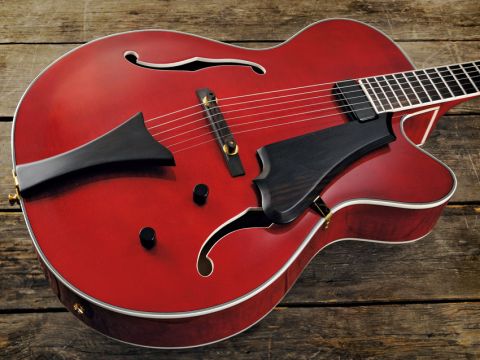 A big-bodied jazzer that offers a lot of class and quality for comparatively little money.

The Chinese-made Contemporary series from Hofner specialises in mixing the maker's long established designs with updated interpretations, all at lower prices than the guitars' German-origin equivalents.

The line has recently been expanded by the addition of three archtop acoustic-electrics, the catchily titled HCT-J17 being the mid-model in this big-bodied trio.

Its headstock has echoes of Epiphone, but harks back to a shape seen on some fifties Hofners. The black face carries a script-style logo and a floral scroll pattern, also employed on many earlier examples from this famous German maker.

Gold-plated tuners match all other metalwork on the guitar, although the kidney-shaped buttons are black, while their smooth operation is assisted by a nicely cut nut.

A sleek rosewood fingerboard features a shallow radius and 648mm (25.5-inch) scale length, the latter being in keeping with this model's Gibson L-5 influences. No front position markers are provided, but black side dots show up well against the white plastic edge binding.

Like many modern Hofners, the J17's fretboard doesn't include a zero fret, while the 20 fitted are of medium size, neatly seated and smooth topped, although a few rough ends are apparent.

The glued-in maple neck is comfortably proportioned, with a shallow-ish 'C' cross-section and familiarly mainstream measurements. A volute reinforces the neck under the headstock, while down at the other end it meets the body at the 14th fret.

Unlike earlier Hofners, the remaining neck length is set into the body, rather than employing a floating overhang. This much firmer foundation should ensure no joint movement in future years, although acoustic resonance is probably reduced.

Laminated construction partners a spruce-faced top with flame-figured maple back and sides. Bound edges and f-holes contrast the high-gloss trans red finish of the our guitar, with sunburst or natural available as alternatives at respectively higher prices.

The body components complement appearances in a quietly classy manner. The pickguard is a pretty substantial piece of ebony, with heavily bevelled edges enhancing an attractive curvy outline that's unlike any established Hofner design.

On the review guitar it tends to move on its mounting bracket, but not enough to cause any unwanted vibrations. Made of the same timber, the freestanding bridge is strictly conventional, with a compensated single-saddle top section and twin height adjustment wheels.

The ebony theme extends to string anchorage, courtesy of a long and gently flared tailpiece. Even the control knobs are equally woody, topping the body-mounted volume and tone controls. These govern a Hofner mini-humbucker sporting a suitably subdued, plain black plastic cover. The spec states this pickup is a floating type, but the gap beneath is actually occupied by a thick, hard rubber base that makes firm contact with the body front.

The HCT-J17TR isn't perhaps as big as it looks in terms of actual acoustic volume, but a mid-dominated tonality imbues a slightly brassy emphasis that projects well. This character is conveyed in quite faithful fashion by Hofner's mini-humbucker, which isn't over-powerful but provides a delivery that balances upper end clarity with crisply responsive bass.

The volume and tone controls are quite gradual in operation, and even with the latter fully backed off the sound stays far from woolly, retaining plenty of articulate definition for chords and lead lines.

Despite all the air inside, this Hofner is reasonably resistant to feedback, although low C quite easily induces a quickly escalating hum cycle - but at least this is a more musical key than some!

The combination of German design and Chinese construction makes for an impressive yet affordable jazz box. The HCT-J17TR's classy looks are matched by very able build standards and players in the market for such an acoustic-electric could find Hofner's particular blend of individuality and Gibson influences very appealing.