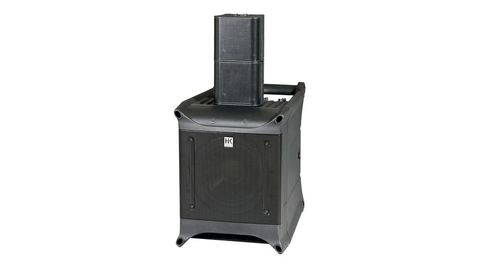 As long as you have your specific EQ and effects covered, the Nano 300 is a tonesome and versatile small gig solution.

What do us guitar players know about PAs? Even if we sing, it's often very little. Perhaps the change comes when - as many of us have no doubt realised - there are more gigs for soloists and duos than there are for hard-rocking electric blues outfits.

And for every small 'venue' (aka a pub, restaurant or bar) that has a PA, there's another that doesn't. For an increasing number of players, PA self-sufficiency is becoming more essential than ever.

For the solo guitarist/singer, you can get good results with a quality acoustic amp, especially if, as with AER's market-leading range, you can put the small combo on a mic stand.

HK Audio (the pro-audio side of Hughes & Kettner) is one of these, and the Lucas Elements range has proved highly successful. Now comes its little brother, the Lucas Nano 300 - an ultra-compact amp/ subwoofer and dual-satellite speaker system with integrated three-channel mixer, which can be configured in mono or stereo with a maximum output of 230 watts.

German-designed and made in China, the Lucas Nano 300 retails at £599, but to really make use of its potential you'll need its add-on pack one (£99, also pictured here) and the neat carry bag with handle and wheels (£89), which all adds up to £787, although you should be able to find it cheaper in the wild.

Bearing in mind you can easily spend that, or more, on acoustic amps from the likes of AER and Trace Elliot, the Nano 300 begins to look highly attractive.

The main floor-standing Class D amp/subwoofer/mixer unit in fact sits between those two acoustic amp brands in size. For transport, the two satellite speakers lock into the rear.

You can set the system up in a variety of ways: place the two satellites on top of each other via neat clip-on locking docks for a standalone mono unit, or add the pole from the add-on package to place the two units at ear or head height.

Using the tripod and second pole (also from the add-on pack), you have the option of separating the two satellites for a left/right stereo system.

In terms of the control panel, which is mounted on the back-top edge of the sub unit, we have three input channels.

Input one, with a single XLR/ jack combo socket, is switchable for mic/line sources and has a level control and single voice/contour tone control.

Input three has level and contour again, but with stereo inputs (mini jack or RCA) designed for mp3 players, laptops and the like. There's a separate sub level control and L/R balance should you be running the system in stereo.

Finally, we have various output options, so you can send a composite of all three inputs to audio recorder, a larger PA if you're using the Nano as a personal monitor or, via the link output, to another Nano 300 for a more powerful stereo setup.

Setting the Nano 300 up as an at-home hi-fi and running our laptop into input three, we're impressed by the quality - there's the potential here for crisp monitoring, especially if you're recording at an outside location.

In mono, the power seems generous; in stereo, it's obviously less so, but the full recorded picture is replicated. As a compact mono acoustic amp, it's got that modern hi-fi character and, as we said, if you raise the satellite speakers it makes a real difference, not least to feedback issues, in a small venue.

What we don't have, however, is any guitar-specific EQ or even simple reverb. This means you may have to rely on having an EQ pedal or multi-effects unit for your guitar and/or your voice.

It's this lack of basic effects that lets the Nano 300 down for small gigs, where as a vocal PA, especially in a good room with not too much ambient chatter and noise, it's a near-perfect sound reinforcement system... if only we could add just a touch of reverb to proceedings.

Of course, many of us use stompboxes or multi-effects with our acoustic instruments; vocalists, too, have an increasingly wide choice of stompbox-style vocal processors to choose from.

If you have that outboard gear, the Nano 300 is a superb small-gig system. Add a third musician who needs an input, or even a foot-stomp pedal, and you're going to need an additional mixer, preferably with some onboard EQ and effects.

After living with the Nano for our relatively short test period, it certainly becomes part of the family. The sound quality really can't be overstated, and the small footprint means you can leave it set up as a hi-fi, a monitor for your recording setup or, for example, with an mp3 player plugged in to create a superb practice station.

The ergonomics are great. It's quick to pack up, fits easily in the boot of a small car and can be taken on public transport if necessary. And crucially, setup time is fast, too.

This is a superbly engineered, ultra-compact mini acoustic amp/low-power PA or sound reinforcement system for a variety of performance and even live recording situations. But we'd strongly advise you to consider what you need, and whether it might involve additional effects, more specific EQ and even more inputs.

Many of these features are offered by more conventional powered mixer/ dual-speaker systems, which, while not quite as cutely elegant as the Nano, may serve you better in the field.