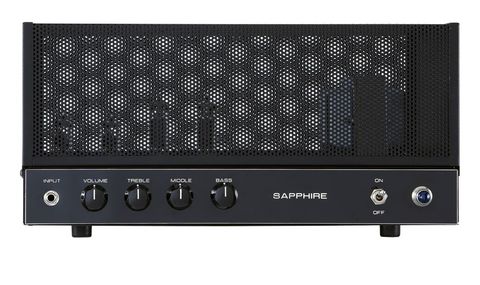 Not perfect for every player, but if you prefer to drive an amp from your guitar, the Sapphire could be right up your street.

We've had some amps on the test bench recently that really push the limits of modern technology, with USB sockets, app controllers, MIDI, digital effects and more.

But at the heart of some of them, you'll still find a glowing valve. The technology may be old, but it's hard to beat. Can you buy an amp built like they were back in the 50s, but with modern tone and response? Certainly, but they're few and far between, with most emanating from the USA. Now, however, there's a British option that could change all that: welcome the Healey Sapphire.

The Sapphire has a clean-looking black powder-coated chassis, with a simple perforated steel cover to protect the valves and transformers within. We like the tidy, minimalist styling that manages to look simultaneously modern and vintage. The front and rear control panels are engraved black Traffolyte (a material named after Trafford Park, where the factory that made it is located), echoing the traditional look of some of the UK's well-loved brands.

The Sapphire uses very high-quality components throughout, with a hand-wired circuit connecting everything together on tag boards: a simple and robust construction that will last practically forever.

The wiring and soldering is flawless, as you'd expect. The Sapphire's circuit isn't a vintage clone, rather a completely new design that's based on a clever parallel single-ended output stage, using two EL84s running in pure Class A to deliver about 12 watts of power. A simple front panel layout of volume, bass mid and treble is complemented by an even simpler rear panel that offers a choice of eight- and 16-ohm speaker outlets and not a lot more.

As you might guess, the Sapphire is aimed at the type of player who prefers the organic, interactive approach over prodding at footswitches and tinkering with presets. For an amp such as this to succeed, it has to have something pretty special to offer in the tone department, and the Sapphire doesn't disappoint. Initially, there was a little more hum than we'd expect, but changing out the valves reduced it to acceptable levels.

"In the first third of the volume control's travel, the Sapphire produces a sweet clean sound that's equally flattering to single coils and humbuckers"

In the first third of the volume control's travel, the Sapphire produces a sweet clean sound that's equally flattering to single coils and humbuckers. As you progressively turn up the volume knob, the amp begins to overdrive in a very addictive way - you'll find there's just the right amount of edge, warm but not nasal mids, and lows that are defined but still fat enough to add depth and punch through an appropriate cabinet.

The tone controls aren't very wide ranging, but they don't need to be; there's more than enough here to fine-tune the Sapphire, with bass, mid and treble interacting smoothly. Max out the volume control and you'll get a superb singing overdrive that's fantastic for classic rock, fusion or blues.

Tone aside, an amp also needs to have the right dynamic response to make those overdrive sounds work, and it's often the case that boutique products such as the Healey tend to have an overly quick attack that emphasises mistakes. Surprisingly, the Sapphire does the exact opposite, with a seductive natural compression that gives an almost vocal-like quality to solos.

"That response is deliberate," says James Healey. "We voiced the Sapphire with the intention of getting the same fluid dynamic feel of a certain very popular high-gain master- volume head. Getting that response from the Sapphire, which has no master volume, wasn't easy at all, but the result was worth the effort."

As noted, the Sapphire sounds great with single coils or humbuckers. However, the best results came from our PAF-loaded Les Paul - the Healey definitely appreciated the extra punch and delivered stellar lead tones that easily outclassed some amps costing twice as much. Using an open-backed 2x12 Vintage 30-loaded cab, the 12 watts of pure Class A power turned out to be more than enough for an averagely loud pub gig, although there isn't a great deal of clean headroom.

For a hand-wired all-valve head, the Sapphire represents average value for money - until you plug it in. After a few minutes with a good guitar, you'll likely begin to mentally check your bank balance and begin crafting a few good reasons to justify buying one.

Yes, it is short on flashing lights and toggle switches, but its stunning response and tone go a long way towards making up for its lack of features. The modern, multi-function designs we take for granted these days are a relatively recent invention; the amps that produced some of the best music ever played on the electric guitar were often very simple by comparison, but they had a sound and response that inspired generations - and the Sapphire does, too.