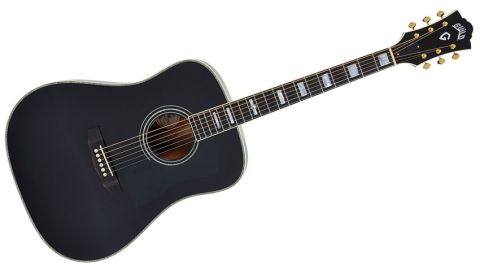 A visually striking dreadnought with a punchy and instantly likeable acoustic tone.

Guild has been building guitars since 1953 and its D-series guitars (dreadnoughts) have proved to be flagship models, not least the D-55, which, since its launch in 1968, has been a highly respected dreadnought.

In 2011, Guild Guitars staged a showcase event for European dealers. Only those attending the event could stock these unique GSRs, Guild Special Runs. Fender GBI selected two guitars, a D-40 Noir (reviewed here) and a F-30CE Cocobolo, and duly dispatched them to us for evaluation.

One of the few things those two guitars have in common is the D-TAR (Duncan Turner Acoustic Research) Multi- Source pickup, a unit that combines the Wave-Length undersaddle system with a condenser microphone. The Multi-Source system starts with the Wave-Length unitary design, piezo, co-polymer, undersaddle pickup, which is coupled to an 18-volt, low-noise, high-input impedance preamp.

The pickup itself is wrapped in copper shielding. D-TAR claims running the system on 18 volts (which is achieved with a voltage power booster) provides twice the dynamic range of a typical nine-volt system. This is because the additional voltage gives the signal more headroom, removing 'quack' when strumming or picking with gusto.

Changing the two AA batteries is no easy task. The cells are housed within a casing that sits inside a fabric 'pocket' attached to the inside of the neck block with Velcro. We couldn't access the batteries without slackening off most of the strings - annoying.

Seated just inside the lip of the soundhole is the omni-directional condenser microphone. To isolate it from unwanted vibration and handling noise, the microphone is embedded in a shock mounting. Interestingly, the mic signal has two stages of frequency roll-off, which work together in order to combat internal microphones' tendency towards low-frequency feedback.

Low-profile rotaries fitted just inside the upper bout side of the soundhole control master and mic volume respectively. If you're used to reaching for a shoulder-mounted control panel, rotaries located inside the soundhole can be fiddly to use, not least because they're situated so close to each other. Adjustments mid-song, say for a solo, can be very tricky. That said, it's a good thing that such a high-end guitar has not suffered intrusive surgery to accommodate a control panel.

Based on the 1963 dreadnought model, Guild's D-40 was only previously available in natural, Antique Burst or Ice Tea Burst. With its jet-black, high-gloss (nitrocellulose) finish and gold-plated fittings, the GSR D-40 Noir is a striking guitar.

Adding to an overall sense of opulence, the solid Engelmann spruce top is edged with ivoroid binding and abalone purfling. The ivoroid binding continues around the headstock, solid mahogany two-piece back and ebony fingerboard. The ebony bridge is home to bone Parisian eye-topped bridge pins, while a stylish black tortoiseshell pickguard completes the top's luxurious adornments.

Further decorative embellishments include a centre strip of ornate parquetry to the D-40's back, and mother- of-pearl block inlays. The 12th fret inlay features an abalone 'G' on top of the block marker, as does Guild's traditionally shaped headstock that accommodates custom Gotoh SE700 series open-geared tuners and a bell-shaped cover for the dual-action truss rod.

Far from being simply a 'looker', the D-40 is made of high-end materials. Adirondack 'red' spruce has been used for the scalloped bracing, the slim-heeled three- piece mahogany neck (dovetail joint) is a mahogany/walnut/ mahogany construction and the tail block is formed from birch. Close inspection reveals evidence of extremely high standards of quality control. From every angle, the D-40 is beautifully fitted and finished.

Guild dreadnoughts are known to produce a sparkling, high-mid voice layered with warmth and character. From the off, the D-40 Noir is instantly recognisable as possessing 'that' Guild voice and first-position chords are dispatched with a bright punch and clarity. It's noticeable that a strong bass remains constant - even when easing off the accelerator.

Perhaps the most impressive aspect of the D-40's performance is its ability to handle variations in dynamics with accuracy and articulation, an ability not diminished by the use of a capo. Acoustically, the D-40 is powerful, responsive and dynamically versatile.

Employing the services of the D-TAR Multi-Source pickup system produces a full, mid-heavy output. Rolling the mic off completely produces a nasally timbre that doesn't fully warm up until the output includes 100 per cent mic signal. In truth, we'd like a little more tonal variation from the mic control. However, we're impressed with the D-40's feedback-avoiding capabilities.