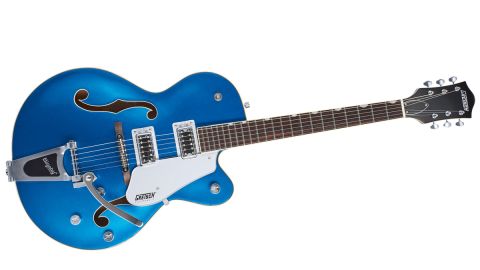 It's been quite a year for Gretsch, and although we're only half way through 2016, we've already seen the launch of the highly affordable Indonesian-made Streamliners and a significant makeover and reorganisation of the high-end Japanese Professional Collection.

Now, Gretsch has turned its attention to its Korean-made Electromatics, specifically the Hollow Body models.

The Electromatic name itself dates right back to the 1940s, and was also used on a Japan-only range in the late 80s. We know it best in its current form, however, which kicked off in 2004 and - until the introduction of the Streamliners - has been the company's "bread and butter", reckons Gretsch's Adam Bowden-Smith, adding that the classic orange Chet Atkins Hollow Body, the 5420 (originally the 5120), "has been the best-selling Gretsch of all time".

While specs have changed over this period, prices have unsurprisingly crept up, too, and although the new 2016 models are pretty much the same price as the 2015 guitars, starting around £700, they are hardly a cheap 'impulse' buy - another reason for the introduction of the Streamliners with their £350 to £395 prices.

Whatever the backdrop, it leaves us with three tiers: Streamliner, Electromatic and Professional, or as Adam puts it: "Good, better and best!"

So, in what amounts to a 'refresh', it's the Electromatic Hollow Body models (the single-cut 5420, the double-cut 5422 and the double-cut 12-strings) that have received the attention.

One change to all of these new models that will please Gretsch fans who couldn't afford the higher-end Japanese models, or vintage pieces, is the headstock: not only is it reduced in size to late-50s 6120 spec, with binding, but the previous models' Electromatic logo that ran down the centre of the head and told everyone you were playing 'a cheapie' is now cited below the Gretsch logo on the pickguard - much more discreet.

Under the hood, the wiring has been upgraded and the nut material changes from Delrin to Graph Tech's NuBone. With arrow-thru-G control knobs, knurled screw-on strap buttons and standard Filter'Tron pickup mounting rings, the package is all very Gretsch - much less generic than the cheaper Streamliners but not as pro- spec'd as the Professional Collection's Player's Editions.

There are no locking tuners or USA 'String Thru' Bigsby vibratos; instead, we have standard open-backed tuners and licensed Bigsbys with the standard-pin string anchors.

Our single-cut G5420T is based on the classic 6120 Chet Atkins Hollow Body - the 'generic' Gretsch we all drew in our school books. It features a new-to-Gretsch colour, Fairlane Blue, which is a deep metallic blue that takes its name from the Ford Fairlane that was introduced back in 1955, the same year that the first version of the Chet Atkins Hollow Body was unveiled.

The new colour is a beautiful setting for the chromed parts, the silver-backed pickguard and ribbed plastic pickup surrounds. It does have that oh-so-new shiny gloss sheen, which is slightly less smooth than the Professional models, but we're splitting hairs: in anyone's book, this is a looker.

Oh, and on the new models that have chrome- plating, you'll find 'thumbnail' fingerboard inlays; the gold-plated models use the Grestch 'hump-block' inlays.

While the Streamliner Hollow Body features just dual longitudinal top braces, the new G5420T, like the previous model, follows pretty much the 'sound post'-style bracing with a pair of squared-edged and quite hefty longitudinal front braces, and a small square section block (not a dowel) placed centrally under the bridge connecting the top to the back.

It's not as efficient either in terms or sustain or feedback suppression as the 'trestle' or 'ML' bracing of the Professional models, but it's better than the Streamliner and should mean the whole guitar - a pretty big 406mm (16 inches) full-depth 'jazz box' - isn't over heavy.

The Electromatics have had 'secured' wood- foot Adjusto-Matic bridges since 2015, so that's not a new feature here. However, it means that not only is the bridge stable, but that intonation shouldn't be a problem, especially if you want to up the string gauge from the supplied 0.010s to 0.011s.

Setup is fast and quite slinky as supplied and the intonation is excellent, like the neck shape, which is, again, very 'Gretsch' with a quoted 'U' shape that feels slightly flat-backed and is slightly trimmer in depth (20.8mm at the 1st fret and 23.6mm at the 10th) than the Streamliners and the Professional models we reviewed earlier this year.

The pickups haven't changed since their 2011 introduction, but a subtle change is that a simple treble bleed capacitor is added to the master volume, which should help you retain the highs as you turn down. Aside from that, it's a very familiar drive.

Plugged in, the top string response of the G5420T is a little soft and, while the pickups are height-adjustable, the pickguard needs to be removed to adjust the treble side.

It's not helped that the neck and bridge pickups have the same polepiece spacing, and the bridge pickup is sited slightly off-centre. However, some compensation for that softness can be made, and with a couple of slight height- adjustment tweaks, the performance changes quite dramatically.

There are no roller saddles on the bridge, which leans back and forth as you move the vibrato arm. Tuning stability is pretty good, certainly once you've stretched the strings, but be prepared to apply a little TLC to those saddles to maximise the stability.

Of course, the 'Gretsch sound' is a combination of the 'creaky ship' construction, the air, the inefficiency, those low-output 'clean' pickups, not to mention the all- important subtle shimmer from the Bigsby with its airy resonance. It's very much the antithesis of the modern solidbody.

When you're playing a Gretsch - especially taking into account this lighter bracing - there's an unpredictability that makes us love or loathe them. There's a textural, grainy nature to the sound that, on one hand, seems very lo-fi but with some reverb and amp-like tremolo, plus that Bigsby, it can sound other-worldly and ethereal.

Don't blame us if you're playing these things way longer than you might your solidbody - especially at home through a small amp.

Picking up this model is kind of like playing an amp'd acoustic, which isn't too far from what it actually is: unpredictable, like the feedback, which can be heavenly or hellish, depending on your volume and stage environment. Get it right, though, and the resonance supports your notes in a wonderfully rootsy organic fashion.

And then there's the versatility, but not in the manner of a modern solidbody with its full humbuckers and single-coil splits. While it's more subtle here, there are plenty of shades from the slightly damped, muted response with the pickup volumes and tone pulled back, to the thinner, brighter and twangier voices with the master volume rolled back and the pickup volumes full on.

It's true that this would not be our first choice as the only guitar we took to a jam or function-band gig - but for a whole host of older-genre styles, from the obvious rock 'n' roll and rockabilly through to much rootsier swampier voices that love a little 'hair' or outright grunt and grunge, it's hard to think of a guitar that is better suited.

And as many Gretsch owners will already know, it will also make a superb recording guitar where that textural tone is absolutely superb to overdub and layer parts - in virtually any style you can imagine.