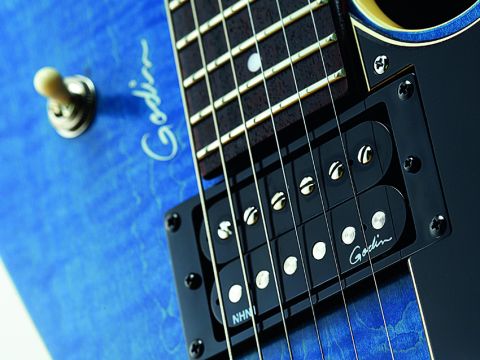 The new Core series from Canada's Godin spans three models, all sharing the same styling and construction, while the component count is equally alike, apart from the preference of pickups for each.

The latter is indicated by model designation, with the suffixes P-90, HB and EMG offering a pretty plain indication of what pickups are onboard each model.

The Core HB's headstock recalls the gently curved, slimline shape seen on Gretsch solids from the '50s, while the neatly edged black face bears appropriate Godin and Core logos, plus a proudly prominent 'Made In Canada' legend. The contemporary-type tuners also carry the company brand and are chrome-plated to match the other metalwork, but small black buttons offer an effective cosmetic contrast.

A mahogany neck is glued-in and this follows in the construction footsteps of the Icon line, which was the first to depart from Godin's usual bolt-on neck join.

The fingerboard's shallow 300mm (12-inch) radius and 629mm (24.75-inch) scale length, both Gibson staples, make for bend-friendly blend. The 22 frets fall on the slim side of medium but are all are nicely fitted and finished with consistently sleek tops and snag-free ends. The Graph Tech Tusq nut helps to eliminate tuning-induced creaks or jumps via smooth slots that are cut to optimum action depth.

The Core's body outline is a well-established Godin design, also employed across the company's Icon and Signature series, as well as on certain models in the Performer range. The upper bass bout meets the neck back at the 15th fret, but the deep cutaway contributes to a reasonably easy upper end reach.

In keeping with the Core's no-nonsense image, the body is flat on both front and back, apart from a small amount of rear waist contouring to add some creature comfort. Core construction is actually semi-solid (or 'chambered' at least), although the internal airspace isn't exactly over-apparent in terms of weight, which is an evenly distributed 3.5kg.

The front of the review example is in denim flame finish and, as this name suggests, the maple face features a fair degree of figuring that's enhanced by an appropriately blue finish.

Confirmed by the HB suffix, this Core is equipped with twin humbuckers, these being Godin's Nitro models, with black bobbins boasting the appropriate logos, plus matching mounting rings. The pickguard and knobs are black, but the switch tip is the only piece of plastic in contrasting white.

No coil-splitting facilities are provided, but the pickups employ four-conductor cables that allow such circuitry alterations if required.

This can usually be achieved quite simply, just by soldering the coil link wires to the spare tag on each relevant tone control. However, the somewhat unconventional, circuit-board-style mini pots used on these Godins make this modification a little more difficult.

The Core's semi-solid chambered construction may not be immediately apparent weight-wise, but it does contribute to an open and quite resonant acoustic character.

Not surprisingly, Godin's Nitro humbuckers live up to their name, although this extra power doesn't decrease tone. These pickups also have a useful clarity that's apparent in all three settings, but this is backed up by the expected extra beef.

The guitar acquits itself well in a clean context, but predictably comes into its own when things start getting dirty. The HB version naturally wastes little time before going into full-on, upfront rock mode. It impresses via chunky, dense textured chord work and expressive sustaining solo abilities, although the sound mushes up when subjected to over-enthusiastic gain.

On both models the pots prove very effective, with each benefiting from a consistently gradual sweep. The volume controls maintain the same sonic character when reducing output, while the tone controls smoothly slacken off treble content, taking on an almost acoustic quality that keeps the sound essentially mud-free all the way back.

This is an extremely well turned out, fuss-free guitar that'll cope admirably with the simple stuff but hold its own in more sophisticated situations too. Our only real reservation is in the cost, which doesn't really tally with the Core's less-than-boutique image.

That said, it should be available in shops at a keener price. If you're after a straightforward, rock-solid instrument you could do far worse than checking it out.