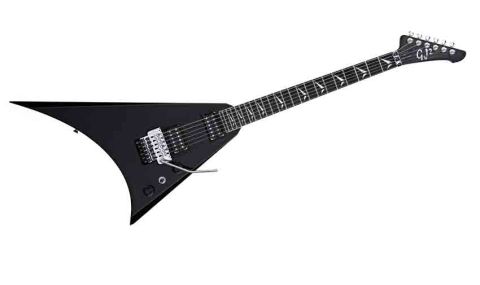 A piece of rock history with tones that will surprise with their versatility. Just go steady with the points!

The original hot-rodder, Grover Jackson, is back with the Concorde 5 Star, an addition to his GJ2 brand that unashamedly echoes the glory days - a time when instruments made in his modest Californian repair shop were the symbol of an entire genre.

Under the Southern Californian sun in the late 70s, rock was given a fundamental shot in the arm due, as is often the case, to a perfect storm of events. The spawning of hair-metal bombast as a reaction to the bloated state of the music of the time was one, and the genre-changing technique of Edward Van Halen was another. The third was the rumble being made by Charvel Guitar Repair, based in the LA suburbs.

The shop was run by Wayne Charvel and Grover Jackson, and Eddie famously put together his original striped Frankenstein from parts bought there. By the mid 80s, Jackson guitars were the cool tool.

"Everyone who was anyone in the metal business was coming to us for guitars," remembers Grover Jackson today.

"We were the kings of the hill."

GJ2 makes no bones about the fact the Concorde's roots in the original Randy Rhoads model. In fact, among the custom options for the guitar is a pinstriped paint job applied by Ernie Pedregon, the man who performed the same task on Randy's white RR back in the day.

The construction remains much the same, with the Concorde offering a through-body maple neck flanked by basswood wings honed into that iconic shape, and although neither of Randy's own Jacksons had locking vibratos, here an original Floyd Rose is used to keep things in tune. It's routed behind the bridge to maximise upward travel.

The GJ2 range is mainly served by Grover's own Habanero pickups, and here two Alnico V Classic 'buckers are used. No Duncans, then?

"I was one of the largest manufacturers of pickups in the USA - in 1986 we were making 4,000 of them a week," says Grover. "So when we decided to do GJ2 guitars, I didn't want to buy other people's pickups, because I can make them as good as anybody's."

The jack plug is sited right at the centre of the rear cutaway, causing the jack to stick into your leg when played sitting down, so there's little choice but to strap up and stand, but rest assured that it's nicely balanced, even though that point could cause some damage if wielded with too much vigour.

Where we were expecting an incendiary performance, the vintage-flavourings of the pickup voicing actually allow us to turn the amp up, thereby obtaining a surprisingly warm tone.

Unlike Kirk Hammett's EMG-equipped RR-1, the Concorde's tone has plenty of subtlety, if such a word is even applicable here. It caresses rather than rasps, and the rock rhythm tone is sufficiently full to cover a number of the required bases, Van Halen included.

Upping the gain sharpens the edge yet the satisfying depth remains and, in short, the Concorde is far more versatile than its body shape may suggest.

So, the burning question is this: why would anyone buy the Concorde over its arguably more famous and certainly more widespread equivalent, the now Fender-owned Jackson RR-1?

"I hope that it'd stand on its quality," comments Grover. "I'm sure the Jackson RR-1 is a fine instrument, but I hope that people will play both and see which one speaks to them. If one does speak, then they should buy it."

The Concorde and RR-1 are priced very similarly, so the choice is a more of a personal one. The GJ2 has a more versatile tone, which is certainly appealing, but are you going to play restrained blues on such a weapon? Maybe not, but at least that's an option, which you can't realistically say about the RR-1's bridge-mounted Duncan TB-4.

That such an important figure in the entire evolution of the electric guitar is back to doing what he loves would be interesting enough, but the fact that the quality of these guitars is up there with those that still bear his name is even better.

If you're in the market for a high-end rock axe, don't miss your chance to try one.