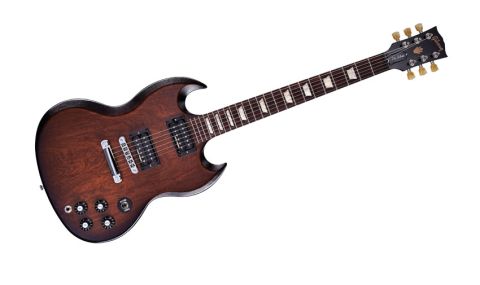 A badass hard rock guitar that's a pleasure to throw around. The Min-Etune technology is seriously impressive, to boot.

Les himself was never a fan of the revised signature model that became the SG, and his name was removed from all production instruments by late 1963. Nevertheless, 2013 is Gibson's declared The Year Of Les Paul, which means a boatload of new versions of the guitars that originally carried his name: the Les Paul and SG. The 70s run of the latter model is being represented by this attractive SG '70s Tribute.

The '70s Tribute may hark back to the SG's past, but it's been brought bang up-to-date with Gibson's Min-ETune system - the firm's latest take on mechanical self- tuning for electric and acoustic guitars.

Developed with German company Tronical, the headstock-mounted gears are the next generation of Gibson's 'Robot' technology, and appears on the new Tribute Les Paul and SG models. The whole Min-ETune system - tuners included - sits on a thin black rectanglular plate that covers most of the rear of the peghead. The weight impact is negligible and visually, it's very discreet, too.

Another feature common to all new Tribute models is what Gibson refers to as its 'Vintage Gloss' nitrocellulose finish. In the flesh, this is a pleasing off-the-gun thin satin nitro, complete with grain sinkage, that hasn't been cut back or buffed to a mirror-like sheen. Straight out of the gigbag, the guitar feels more akin to a well-used workhorse than the traditional gloss and, for this writer at least, it has an immediate pick-me-up-and-play-me appeal.

We'd have to agree with our editor in chief when he remarked that this guitar is doing nothing to cure a recent bout of chronic SG GAS. Indeed, the '70s Tribute SGs is a joy. The 'grandmother's coffee table brown' (aka Vintage Sunburst) hue is highly evocative of that bygone era when the guitar industry decided to ditch eye-catching candy colours in favour of walnut, while the witch-hat knobs and Dirty Fingers pickups complete the package.

24 frets isn't exactly a specification that's particularly rooted in the '70s, but the uniquely generous upper-fret access afforded by the SG's design does mean that you have easy access to the full two octaves.

Ordinarily, we'd have baulked at the idea of a Gibson SG without a scratchplate, but this guitar gets away with it. Light weight, easy access, great neck profile, seriously raunchy acoustic tones... we'd be mad not to plug it in.

The '70s Tribute SG has the same Dirty Fingers pickups we encountered on the equivalent Les Paul model a few months back, but fixed to a thinner, lighter guitar, there's a much less smothering response. They are still loud, but there's more air and more treble content, and as a result this is one badass hard rock guitar that's a pleasure to throw around.

The truly massive potential of the Min-ETune technology notwithstanding, the guitar sounds very good indeed, and with just a touch of careful attention applied to the fretwork, it would be difficult to fault for the price.

However, the real talking point here is the Min-ETune functionality. Some players will sneer at the mere idea, of course, but anyone who does a lot of studio recording or uses multiple tunings in a live scenario should check it out without delay.