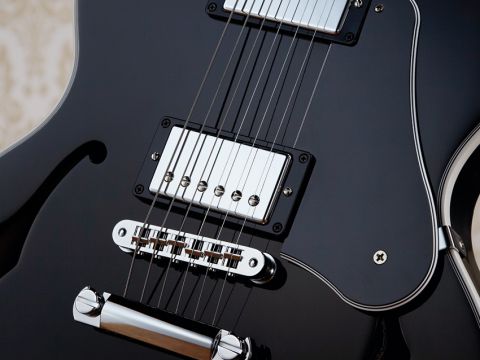 A guitar that can do almost everything you'd want - a beauty and a beast combined!

The thought of a Gibson semi with no arched top at first seemed rather at odds with the ES range's heritage.

Yet the new-model Midtown Custom's smaller body size renders this irrelevant. Our ebony version looks great too - very stark with only the chrome hardware and white/black binding as contrast.

"This is a versatile instrument: anything from classic rock to pop and funk will be within its capabilities."

Hewn from A grade timbers, the tonewoods are as on the LP Classic, but the solid mahogany back has been heavily routed out to create the semi vibe. A three-piece maple cap is glued on, with f-holes lending the final visual touch.

Gibson has also cleverly retained the ES-335's perfect proportions, albeit scaled down dramatically - to put it in perspective, while a 335 is 16.5 inches (around 420mm) at its widest point the Midtown is a full 38mm less, making it much less of an armful.

Looking at the neck, again glued-in mahogany, we see what appears to be a bound ebony fingerboard inlaid with the Custom's pearl block markers and instantly recognisable 'split diamond' headstock detail.

But this 'ebony' is Richlite - a composite of cellulose fibres and phenolic resin - and those inlays are, as on the Classic, acrylic. Gibson describes Richlite as offering, "the constructional and resonant properties of fine hardwood, but with improved durability, for a superb feel".

Do we care that it's not 'real'? No we don't. In fact we rather like the way that, from a few feet away, no one would know your guitar didn't sport a bit of Indian forest and a mollusc or two. It also made us feel rather self-satisfied about our newly discovered green credentials.

Pickups on the Midtown Custom are Burstbuckers (on the Standard version they're 57 Classics). With this more vintage drivetrain, the semi's tendency to exhibit more openness and dynamics is exacerbated, so there's plenty of potential for contrast.

With the standard switching layout for Gibson semis everything falls intuitively to hand and it's great that the thick mahogany rims enable the jack socket to be removed from the front and secreted on the rim.

The guitar's light weight and relatively diminutive size make it a joy to play standing or sitting, and of course the 19th-fret neck joint means upper-fret access beats the LP. It's weird: this is a brand new model, yet strap it on and you could play it blindfolded.

The Midtown sounds sharper than an LP and less innately middly, its semi-solid nature suiting the Burstbuckers well. It's apparent, too, that this is the more versatile instrument, and that anything from classic rock to pop and funk are within its capabilities.

The guitar also invites you to tweak its volume and tone controls for endless variations in clarity or front-end amp overload. Riffs, funky rhythms, open chords, and solos in virtually all genres are the order of the day.

This guitar can really rock and, in fact, for a recording session a Midtown could cover the work of anything from a Les Paul to a 6120 or Telecaster.