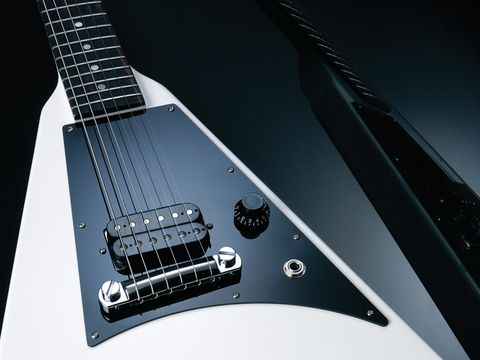 Authentic sounds or 'that' logo on your headstock? The choice is yours…

Stop the press. Hold the front page. Cancel the game of French cricket and join the stampede… because a USA Gibson Flying V just arrived in TG Towers.

Like a visit by a state dignitary, crowds gather, necks crane and eyes bulge as the iconic ice-white toasting fork makes its stately progress through the office in a sedan chair. Then someone spots the price tag. Imposter! Counterfeit! It can't be real! Well, it is. Sort of.

As veteran gearhounds will know, the original Melody Maker axes were launched by Gibson in 1959 as a 'student line', still bearing the iconic logo on the headstock and ticking many of the same spec-sheet boxes, but priced within reach of working musicians.

When we tell you that Carl Barât of The Libertines plays a Melody Maker, you'll appreciate the rough 'n' ready vibe.

Epiphone has handled the whole 'affordable option' side of the Gibson operation for decades now, so it was perhaps surprising to see the Melody Maker range resurrected in 2007, and four electrics unveiled at recent trade shows: a Les Paul, an Explorer, an SG, and this one, the Flying V.

This V looks like a Gibson. It even smells like a Gibson. But there are critical differences. For one thing, it's massively cheaper, with only the thinnest of margins between this model's RRP and Epiphone's 1958 Korina V.

Then there's the spec. In 1958, the original V comprised two slabs of korina (a lightweight African timber similar to mahogany). Like the other Melody Maker releases, however, this body is made entirely of maple, with only the set neck flying the mahogany flag.

This is sure to have tonal implications, but from a physical perspective, we like it: the body is slim and light, the nitro paint is nicely finished, and the fretboard - whose use of heat-treated maple sounds plain weird - is smooth and fast.

The Melody Maker neck profile isn't much of a departure, and, as tradition dictates, you still can't play the damn thing when you're sitting down.

So far, so Gibson, but tone is where some punters will run back to the more traditional Epiphone option. It's pretty obvious that when you substitute mahogany (a dark, meaty-sounding timber) with maple (typically bright and snappy) you're in a far more biting tonal ballpark.

As a result, this V doesn't sound particularly like its forebears - a situation that's compounded by a pickup layout with just one HB-103 bridge humbucker.

It's true that most V players are soloists, and this model is dynamite for lead, but it might have too much top end for rhythm players, and either way, there's no excuse for Gibson to leave off the tone control. That's not 'minimalism', it's corner-cutting.

So here's the bottom line. If you're an all-round rocker who deals in chunky rhythms, biting solos and craves the traditional mahogany warmth that Gibsons are famed for, Epiphone's version is still your first stop, and you'll save yourself about a ton.

If you only play solos anyway, love pin-sharp clarity, don't give a toss about the blueprint, and just really, really want to own a 'proper' US Gibson electric - and who doesn't? - then this model could be your schoolboy fantasy made flesh.