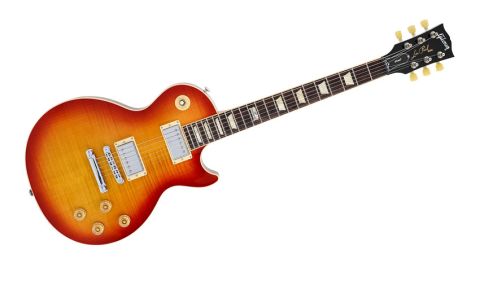 The best version thus far of a guitar that's always been the single-cut to beat.

Gibson messes with the Les Paul at its peril. Forums light up when the company does anything against the wishes of the model's acolytes. But when a near-perfect design has remained almost unchanged for over 50 years, it almost becomes a millstone around a manufacturer's neck: to modernise or not? You're damned if you do, and damned if you don't.

Recent years have seen consistent upgrades in the regular Standard, pulling the model up on the coattails of improvements to the R8 and R9 Reissues. With 2014 - Gibson's 120th Anniversary - the changes, while not obvious, are some of the most significant we can remember.

For its latest Standard, Gibson felt the time was right to bring both boutique elements and technological advances into play, dragging the instrument bang into the 21st century. Timber-wise, things remain fairly traditional, except here an AAA-maple cap sits atop a chambered mahogany body. Hollow sections radiate all around the perimeter, reducing weight and almost certainly influencing tone.

The mahogany neck and rosewood fingerboard remain, but with differences over past models: the neck's 'slim taper' profile is now asymmetrical, so extra meat has been removed on the treble side; also, the fret ends go over the binding, instead of the plastic being sculpted around them, so strings can't be trapped in the fret-to-binding joint.

Electronically, things are beefed up, too: a pair of BurstBucker Pro pickups is mated to the usual three-way selector, but all pots are push- pull, activating 'tuned' coil-taps, phase and bypass options. The icing on the cake is Gibson's Min-ETune. This powerful device auto-tunes the guitar at the touch of a button - it's simple to use, and allows both factory and user-created tunings to be implemented.

There's no pickguard fitted, and Gibson hasn't provided one in the case for you to attach, either, should you wish; but many remove it anyway, and at least this way, there are no ugly screw holes to mar that lovely nitro-finished top.

The asymmetric neck profile makes for a very natural feel, especially for 'thumb over' players; it's easy to dig in, but the fingers are unencumbered by too much 'shoulder' on the treble side. The over-the- binding frets make life easier when using vibrato on the top and bottom strings, as 'catching' is eliminated.

As for playing practicalities, a 305mm (12-inch) radius neck, and Gibson's excellent Plek setup, means buzzes and chokes are a thing of the past. It really is a lovely player.

We've explained the Min-ETune in detail before. While not the smallest addition to the back of a headstock, it works extremely well and, with a little practice, anyone can tune, detune and retune with ease.

Using a Fender Blues Junior as test rig, we start with the Standard, and there's a lot to get to grips with! In humbucking mode, the BurstBucker Pros evoke the best Les Pauls of yesteryear. With an R9 as sonic comparison, it's a close-run thing: the Standard is similar in power, but a little sharper toned all round.

Pull either or both volume pots and the respective humbuckers are tapped for a more single-coil character. It's not instant Strat or Tele, but a clearer, cleaner and perhaps more articulate version of the LP tone itself. Pull out the furthest tone knob and, whatever your volume and tone settings, the Standard reverts to bridge pickup full on, whether in humbucker or tap mode.

It virtually eliminates complicated pickup, volume and tone shifts between rhythm and solos. And if that's not enough, all your Peter Green and BB King tones are there, courtesy of the other tone pot's phase-shift option. You'll soon find yourself getting to grips with your favourite options.

The Standard is vintage and modern rolled up in a single package; vintage looks, modern - even ultra-modern - functionality. We love the neck, the visually hidden but powerfully audible switching system and the tones it creates; and also that clever auto-tuning system.

And then there's the value... Looking at what's around at a similar price, comparing what each one can do and - sorry, but we can't ignore it - taking that name on the headstock into account, 2014's Les Paul Standard represents excellent value and a great place for Gibson to be, 120 years down the line.