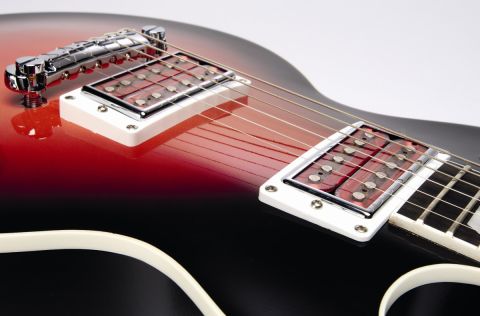 A true Les Paul sound and feel without the need for an osteopath.

When it comes to the Les Paul design, Gibson find themselves in something of a quandary. On one hand, the LP has been the firm's most successful model since the launch of the Gold Top in 1952, and obviously nobody wants to rock the boat.

On the other, they can't keep building Vintage Sunburst replicas of the original Les Paul Standard forever.

Ultimately, like most luthiers with a legendary model on their books, Gibson's philosophy has been to tread a middle line, supplementing their selection of reissues with occasional variations on the theme. The Goddess and GT are two of the latest.

The Les Paul Goddess has been designed to address the eternal criticism of the Les Paul, echoed through the decades by successive generations of nancy boys with insuffcient meat on their bones. We're talking about the weight.

Just the thought of playing a Les Paul makes you rub your collarbone, and here Gibson reckon they've found the solution by using lighter mahogany and reducing the body dimensions. The good news is that, instead of making the Goddess look like the stunted half-brother (or half-sister) of a 'proper' Les Paul, the skimming is pretty subtle.

Unless you placed the Goddess back-to-back with a regular sized Les Paul Standard, you probably won't notice much difference.The quantity might be reduced, but the quality of the Goddess remains sky-high. Put together in Gibson's Nashville plant, the build and finish of this instrument are as impeccable as you dared to dream.

Given the streamlined vibe of the Goddess it wouldn't make sense for Gibson to use a fat neck profile. As it turns out, they've settled on a slim-taper '60s-style shape with a narrow nut, which makes everything far more comfortable.

It still feels like a Les Paul, with the 24.75" scale allowing expressive vibrato and bends, but the downsized vibe got us playing faster. It's a liberating feeling, like putting on trainers after years of wearing boots.

But there's a flipside to all this. Plugged into the obligatory Marshall amp, we found that the Goddess didn't quite deliver the legendary '20-second sustain' of a standard Gibson Les Paul, which was a little disappointing when we tried out some of our weeping blues solos.

Not to worry though, because in every other respect this guitar wipes the floor with the competition. Based on the '57 Classic humbucker, the 490R item at the neck is full and arrogant-sounding, bringing a buttery lead sound to the table that's a great choice for warm solos.

The 498T at the bridge, meanwhile, uses a 'hotter' Alnico V magnet, and is the best choice when you're competing with a hyperactive bassist. We liked this setting best with the treble backed off a touch, unlocking perhaps the ultimate balance of grit, bite and swagger.

When you're reviewing a Gibson Les Paul, there can only be one possible outcome. Purists might be put off by the embellishments, and closet queens scared off by the name, but judged on its own merits the Les Paul Goddess is an absolute knockout.