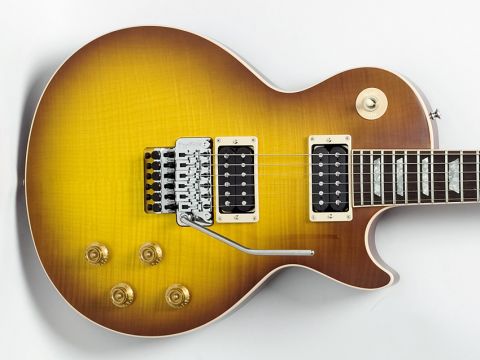 Don't let the Floyd put you off - this is a great blues and rock guitar with added versatility courtesy of a simple coil-split. The contouring takes the playing experience to a new level. Available without a Floyd if you so wish.

With this new model, Gibson could well have come up with what will prove to be the most versatile Les Paul since the first Jimmy Page Signature.

Due to a 'normal' Les Paul's carved top, neck pitch and bridge/tailpiece arrangement, retrofitting such a system is a frightful job - thank goodness Gibson Custom has done it extremely well here.

The mahogany body with flamed maple cap looks normal enough, but it features what Gibson calls a 'weight-relieved' design. Unlike chambering, which is carried out solely for tonal reasons (to change the resonance of an instrument), 'weight-relieving' is intended simply to reduce the amount of mahogany used, and thus the guitar's weight.

That, along with 6mm less body thickness between the Axcess and a traditional Standard, equates to a substantial reduction in weight - around one to two pounds lighter, depending on instrument.

There's also significant body shaping, comprising both a belly contour and, most importantly, a considerably reduced heel to aid upper fret-access. This shaping means that it is far more comfortable to cradle the guitar closely while playing sitting down, compared to a LP Standard.

Electrics comprise a pair of Burstbucker pickups, the slightly under-wound 1 in the bridge and the hotter, more rounded 2 in the neck position.

Both are designed to reproduce that classic vintage-favoured PAF tone and are controlled in the standard way, save for the provision of a coil-split on the treble pickup's tone pot. It's a master split that isolates the inner coils of both humbuckers.

The Floyd vibrato allows for an extremely low action and the neck profile - wide and thin rather than meaty and clubby - seems more of a sixties rather than a fifties ilk. A familiar R4 nut keeps things locked down, and a sextet of Gibson Klusons completes the picture.

In theory, a decreased amount of mahogany plus a bridge rout that takes wood straight from the guitar's 'heart' should equate to a reduced tone but, to our ears, this really isn't the case. In fact, these factors ensure that the sometimes overly mushy push of a Les Paul is given a lighter edge.

With a Marshall-driven crunch, the bridge pickup ticks all the boxes. It's fat yet breathy and, as we said, possesses a lighter tonality that really cuts through. The hotter neck pickup adds more guts, yet still presents an efficient string separation and gives a good and fruity Slash-like neck tone.

It's interesting that a simple coil-split can vastly increase a Les Paul's tonal palette and, with a smoother blues-style drive, the coil-split middle position resembles a boosted Strat's central coil - all body and restrained sparkle.

For super clean sounds, meanwhile, the split tones benefit from the associated lack of mahogany push to give tones that are full yet distinct.

Set stiffly as it is here, the Floyd Rose vibrato feels solid and substantial (they can be unnervingly flightly). Cool undulations are as simple to perform as outrageous dives. And shredding is certainly made a whole lot easier thanks to the reduced heel.

The only niggle is that the coil-split pot can be a little tricky to pull up - a push/push knob would be better, but you soon get used to it.

Flying in the face of our preconceptions, the Les Paul Axcess is a truly gorgeous guitar that perfectly mixes Gibson's heritage with a number of features designed for the modern player. If a Floyd's not for you, the guitar is also available with a stop-tail configuration and the reduced body mass makes it an easier guitar to get to grips with than a Standard.

Gibson's suggested/retail prices aren't quite as removed from reality as they once were, but even at full whack this seems like fair value. The traditionalists won't like it for certain, but whammy-abusing rockers will find its charms hard to resist.