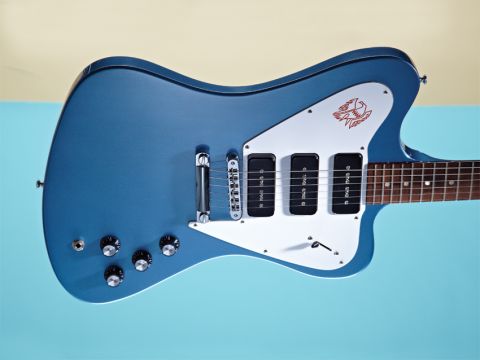 A killer one-two combination: superstar looks and boasting more under the hood than you could possibly conceive.

The Beatles went into creative overdrive in 1965, releasing Help and Rubber Soul in quick succession, while Dylan went electric, and Keith Richards literally dreamt the riff to (I Can't Get No) Satisfaction.

It was the year the '60s got real, and also the year Gibson released the first Non-Reverse Firebird. Coincidence? We think not.

"The tonal options available thanks to this ingenious system are breathtaking, bordering on the unbelievable. From Tele-like twang to growling P90 menace, it's all here."

Edgy, sexy and able to deal with the aesthetic and sonic demands of the emerging modern guitarist, the Non-Reverse took one of Gibson's weirder concepts - the Firebird, first seen in 1963 - flipped it round and created a classic. The Non-Reverse model was discontinued in 1969, and Gibson began Custom Shop reissues in the early 2000s before finally going back into full production with this stunner last year.

Gibson hasn't been shy in ringing in the changes with this update, either. The eccentric banjo tuners of the original have been replaced with sturdy Grover jobs, well suited to that stretched Strat-style headstock.

Unfortunately, the Gibson-logo'd trussrod cover isn't flush to the headstock on our review model, spoiling the aesthetic - a travesty akin to putting a supermodel in three-day-old Y-fronts.

The slim '60s style neck has been the focus for plenty of attention thanks to the fingerboard. Baked maple might sound like a tasty Canadian cake, but it's actually the treated timber Gibson has used to replace rosewood in an effort to save what's left of the planet.

Roasted in specialised kilns to darken the grain and harden up the surface of the wood, the idea of this torrefaction process is to end up with something close to rosewood in look and sound, and it's pretty damned effective.

This is a smooth, quick neck that will ensure players used to rosewood feel right at home. Throw in the fact that it's sustainable and not likely to be the cause of any further legal issues for Gibson, and baked maple gets two thumbs up.

Perhaps the most striking aspect of Gibson's Non-Reverse Firebird is the three coil-tapped P90s, controlled by four push/pull controls and a five-way selector that open a gateway to sonic nirvana.

The tonal options available thanks to this ingenious system are breathtaking, bordering on the unbelievable. From Tele-like twang to growling P90 menace, it's all here.

Given enough time, you could probably work out all the combinations that are on offer, but all you really need to know is that there's almost nothing this insanely versatile guitar can't handle.

It comes alive with a little fuzz, has some beautifully mellow, jazzy aspects and is a capable riff machine. If you could only bring one guitar into the studio, this would be the one to choose.

Our Pelham Blue model is a real heartbreaker, its slinky curves enough to make an impression on any stage. Strapped on, it's well balanced and very comfortable.

On the downside, once ensconced in its Gibson hard case it weighs roughly 15 metric tons (well, almost), so don't plan on hiking across town with it unless your guns are sculpted from solid steel. Still, it's a price worth paying for a truly awesome guitar.