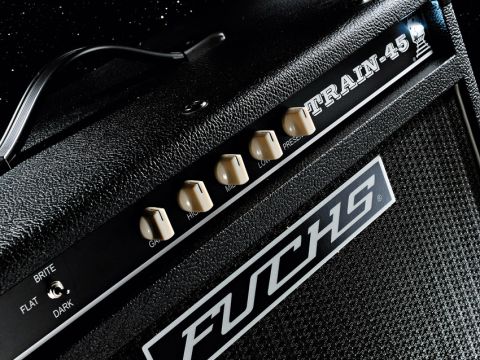 For serious old-school players, the Fuchs is a killer tone machine that will never let you down.

Andy Fuchs is perhaps best known in the UK for his Overdrive Supreme, a stunning recreation and upgrade of the infamous Dumble Overdrive Special amplifier. However, there are other Fuchs amps, and one that's definitely worth a closer look is the Train 45.

This design is inspired by the original Trainwreck amps, which were built between 1981 and 2006 by legendary amp designer and Ampeg guru Ken Fischer from his workshop in Colonia, New Jersey.

They're simple, minimalist heads, but beautifully made with cherry, curly maple or walnut cabinets. One endearing feature is the lack of serial numbers - instead Fischer christened each finished amp with a girl's name.

Real Trainwrecks are very rare, even rarer than Dumbles (Ken only made around 100), and priced well beyond mortal reach. Notable users allegedly include Billy Gibbons, George Lynch and Brad Paisley. Typical second-hand prices range from $30-50,000 dollars, depending on the model.

Consequently, there are many Trainwreck 'clones', while the simple circuits also make them a favourite for DIY enthusiasts. Sadly, there will be no more originals - Ken battled with ill health in later life and passed away in 2006 aged 61.

The Fuchs Train 45 has the usual audiophile Fuchs upgrades to bring it up to date, but does it have the mojo to compete with an original Trainwreck? Let's take a closer look.

The Train 45 is built to Fuchs's usual high standards, with a tough, neatly finished cabinet housing the chassis and single 12-inch Celestion speaker. Incidentally, original Trainwrecks were never offered as combos, although one or two conversions have since been made.

The cabinet is covered in thick black vinyl, which has been expertly applied, with white piping around the black grille cloth to accent the controls and logo. Fuchs uses a highly reflective license plate-type plastic for its badge; we think it would be a good idea to use the same material for the control panels, as they're difficult to read unless you're really close.

The white LED mains indicator is positioned to be the headlight in the train graphic on the far right of the panel - but it's a good idea not to stare at this for too long as it's extremely bright and could do with toning down. The rear of the cabinet has a full height baffle with a large circular port, echoing those seen on Dumble cabs.

The electronics are contained inside Fuchs's tough aluminium chassis, mounted on an extremely high quality printed circuit board, as opposed to the perforated Verotype board base that Fischer used.

We expect only the very best at this level and the Fuchs doesn't disappoint us here, using ultra-thick PCB traces and ground plane technology to emulate some of the more arcane characteristics of point-to-point construction, but with enhanced accuracy and consistency. There's also a DC filament supply to reduce the amount of noise picked up by early gain stages.

The valve bases are all chassis-mounted, with a protective grille surrounding the two EL34 output valves.

The controls are simple: volume, three-band EQ and presence, with a three-way switch offering a choice of bright, dark or flat preset options. The presence control is a 'real' presence function, working in the Train's negative feedback loop, as opposed to a high treble tone control.

On the rear panel there are mains and standby switches and a 'hard/soft' switch that changes the power stage response. In keeping with the minimalist design of the originals there's no effects loop, slave or line out jacks.

The overall impression is one of solid, professional reliability - this is an amp designed to handle anything pro touring can throw at it.

At switch-on, there's practically zero hum from the Train 45, but fairly audible hiss, indicating that this is a high gain circuit. Sure enough, as you turn up the volume control the amp readily pushes into distortion.

It distorts more and gets louder until about three-quarters of the way through the volume knob's travel, after this the tone gets thicker and more saturated without any appreciable volume increase.

The Fuchs is very loud indeed, with a powerful, driving bass and an aggressive, cutting tone that's distinctly influenced by a certain Bletchley-based amp company, so to our ears the Train 45 is better suited to rock rather than blues or country.

You might think there's little in the way of clean headroom here, but the Train 45's best trick happens when you turn down the guitar's volume control, as it cleans up exceptionally well.

The quality of tone you get when you do this is partly down to your guitar's electronics - we used a '94 PRS McCarty, which doesn't have a capacitor strapped over the volume control, and the results were excellent, with a rich, balanced tone that retained all the harmonic bite you normally need to have volume controls on 10 to hear.

The three-way bright switch works quite well, although the dark setting makes things a little too muffled - we tended to use the flat position for single-coils and bright for humbuckers.

The hard/soft switch on the rear panel also makes a noticeable difference; we prefer the soft setting as it generally responds better and feels easier to play.

Overall, the Train 45 is an absolutely killer rock amp that sounds at its best turned up to what Billy Gibbons calls 'patent pending' and controlled from the guitar's volume knob.

This means that it's ideal for traditional players rather than those who prefer the convenience of footswitches. Handily, if you find using it like this to be too loud, you can swap the EL34 output valves with 6V6s, which drops the output level down to around 22 watts. Fuchs also provides two similar models with lower wattage, the Blackjack 21 and the single-ended Lucky 7.

The Train 45's simple circuit provides excellent touch sensitivity with a very wide dynamic range, however, it isn't subtle and you really need to attack it to get the best effects.

Inevitably, with the Fuchs badge on the front, its expensive, but you're getting a world-class amp and a world-class tone - serious competition is somewhat thin on the ground and similarly expensive, so despite it's high price tag we think the Fuchs is still good value for money.

If you want a simple but truly outstanding rock amp, the Train 45 should be at the top of your list to try.