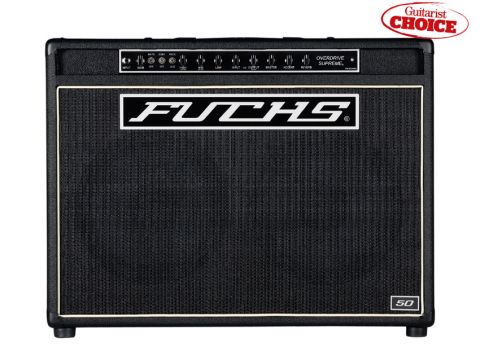 For serious players only (and those with plenty of cash), the Fuchs is a pro-level tone machine that will never let you down.

Although relatively new to the UK market, Fuchs Audio Technology is well known in the USA for its high quality amps and pedals, which sit at the top end of the boutique market. Based in New Jersey, company founder Andy Fuchs started out modifying and repairing amps and effects for music shops and customers back in the seventies.

Today Fuchs offers a wide range of products, although the one model that most folks associate with them is the flagship Overdrive Supreme. Based on the infamous Overdrive Special amps built by Howard 'Alexander' Dumble and used by artists renowned for their tone - such as Larry Carlton, Robben Ford and Carlos Santana - the Fuchs has been evolved to the point where it's no longer just another Dumble clone, although the similarities are quite obvious.

This 2 x 12 ODS combo comes in a very solid cabinet, with a rear cutout oval tuned port, echoing that found on original Dumbles. The joinery and vinyl work is exceptionally crisp, with perfect, evenly radiused edges. Around the back, you can see that Fuchs lines the interior with the same sort of acoustic wadding found in hi-fi speaker enclosures - this is to cut out unwanted internal reflections and it is the only guitar amp builder we know of that does this.

The Fuchs has just one handle to lift and carry it with; it's compact, but very heavy and really needs a pair of handles on the sides of the box. The logo is screen-printed onto the same kind of reflective film used for car licence plates and is somewhat oversized - meanwhile the front panel could benefit from this film as it's tightly recessed and in permanent shade, making the controls very difficult to read.

Electronics are contained inside a thick, precision-cut and folded gold-anodised aluminium chassis - the valve bases and transformers are all chassis-mounted, while the rest of the components are on very high quality PCBs. This differs from a Dumble, which is built up on hand-drilled eyelet boards with a lot more wiring, however, there's nothing wrong with using PCBs as long as they're properly designed and laid-out.

Fuchs also uses a DC supply for the preamp valve heaters, removing any possibility of high gain audio coupling to a hum source on the PCB. Only a handful of manufacturers offer this feature, which puts the ODS in very exclusive company. Not only this, but the entire DC supply is regulated to avoid problems from mains fluctuations.

Despite the PCBs, there's still a fair amount of hand-wiring and soldering inside the Fuchs - and while the wiring isn't as tidy as some amps we've seen, the soldering is excellent. The control layout closely follows the topology of an eighties Dumble ODS, but with reverb and just a single input jack.

Right next to this jack is the first gain control, which sets the internal gain level, not just for the ODS's clean sounds but for the whole amp. This is because the Fuchs isn't really a two-channel amplifier; it's more a single-channel design with a switchable series overdrive stage.

In between the first gain control and the tone stack are three small toggle switches: brite, deep and rock/ jazz. The first two emphasise highs and lows respectively, while the jazz setting pulls a lot of mid-range and some gain from the amp, making for a leaner and cleaner overall tonality.

The usual three-band EQ network includes two pull switches on the treble and mid controls, which add more gain and mids. The input control sets the amount of overdrive, while output varies the overdrive volume level relative to the clean volume level. It's not a master volume as such, rather this control lets you vary the difference in levels between clean and overdrive sounds over a reasonably wide range.

The next control along is the real overall master volume, followed by presence (called accent) and reverb. At the rear is a selection of speaker outlets, a jack for the supplied two-button footswitch and a very well-specified effects loop with level controls for send and return matching. Both level controls feature push-pull pots: one switches the loop from series into parallel mode, the other is a level trim control that alters the loop's signal to suit pro or semi-pro effects devices.

Most Dumbles didn't feature proper effects loops - instead there was a separate device called a Dumbleator, which incorporated buffering, send and return level matching, and a couple of other twists. In this respect, the Fuchs is similar to the few Overdrive Specials that featured a built-in Dumbleator.

Overall, the Fuchs has an aura of slick restrained power and retains something of the original Dumble vibe in use, even though the styling is quite different and the quality of finish more accomplished. It's built to a very high standard indeed and should easily handle any mishap that a pro tour can throw at it. But, most important of all, does its tone live up to the lofty expectations?

You might have already guessed from the controls rundown that this isn't the easiest of amps to dial-in and you'd be quite right; the Fuchs doesn't lend itself to instant gratification. However, the ODS is far more forgiving than its closest competition in this respect and maintains its balance across a wide range of volume levels, from almost conversation up to very loud live gig.

Unlike other similar amps, it sounds good no matter where you put the controls and the louder it gets - and this 2 x 12 can be very loud indeed - the better it sounds, producing shimmering cleans and that characteristic, violin-like midrange- heavy overdrive, with a sweet top-end and just the right amount of bite.

There's plenty of gain available, although the Fuchs definitely favours pickups with real punch. It sounds great with our regular test-bed Strat, loaded with Duncan Alnico Pro IIs, but really comes alive when we plugged in our late eighties PRS CE with HFS humbuckers. The Fuchs also boasts impressively low noise levels, even at extreme gains. In fact, without the miniature cooling fan purring away it would be very hard to tell by ear whether the amp was on or off.

We have just two minor misgivings in the sound department - the reverb is way too powerful (not even Dick Dale would turn this control past two) and the accent control is a little lopsided, with all the extra brilliance happening in the last sixth of the control's travel. It would be nice if both controls were more usable across their entire range.

But this is being pernickety: beyond any doubt, the Fuchs is tonally one very well-sorted amplifier and that's what really matters. Ford and Carlton fanatics take note: if you want thatsound, this amp nails it better than everything else we've heard - including, ironically, one real Dumble.

With a few small misgivings, the Fuchs Overdrive Supreme is by far and away the best amp of this genre we've ever encountered. Rather than be content with a straightforward Dumble 'clone', Andy Fuchs has produced what we hoped to discover: a modern evolution of a well-known design that's often copied but rarely as well understood as it is here.

Fuchs has improved controllability, consistency, tonal range and noise performance to the point where practically nothing else comes close. The construction quality is also way up there, combining precision and finesse inside and out, with pleasing cabinet proportions. At the price, we wouldn't expect anything less, but with used Dumbles appearing less frequently than Brigadoon - and easily fetching upwards of $25,000 when they do - the Overdrive Supreme is as close as most of us mortals will ever get to owning the real thing and in this respect, it represents very good value for money.

For Ford/Carlton devotees who want the absolute best experience, this is it, there's no doubt about it. However the Fuchs is something of a specialist tool and we think that makes it sonically less versatile than some of its competitors, although for fusion players who mix up blues, rock, jazz and country it's hard to beat.

Yes, it's frighteningly expensive, but your money gets you top-drawer craftsmanship with a depth of tone and response that few other amps in the world can match. Make no mistake; the Overdrive Supreme is a serious amp, not a rich boy's plaything.