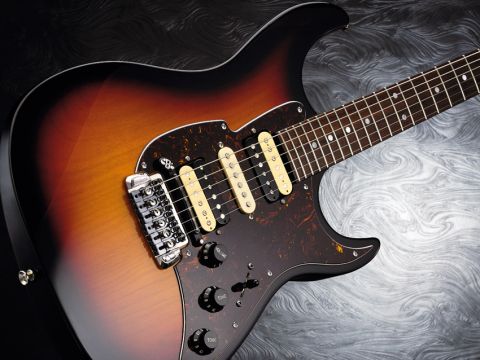 The most efficient and affordable self-tuning guitar to date. The Super-Matic not only self-tunes, but opens up the world of altered and open tunings to any player.

In an industry obsessed by the past, it's rare to get a guitar-based product that can truly be called forward-thinking. But, like those good ol' London buses, we get nothing for ages then two come along at the same time.

Recently we looked at the latest Variax digital modelling guitar from Line 6 and now it's the long-awaited ATD self-tuning bridge, here in its launch guise onboard Fret-King's Super-Matic guitar.

The ATDHT440 bridge isn't the world's first self-tuning bridge and similar technology is available from Gibson via its ongoing Robot series guitars.

The major difference, however, is that all the ATD's clever stuff is housed in a bridge that's designed to retrofit to an American Standard Series Stratocaster. It also needs a mini hex pickup mounted on the scratchplate in front of the bridge, which on its bass-side has the small lozenge-shaped LED readout and on the treble side a simple push-switch operating 'OP' button that accesses self-tuning and the unit's other functions.

The bridge looks only marginally techier than Wilkinson's VSV vibrato and uses a similar design for the six pressed stainless steel saddles, which feature a frictionless diamond coating.

Initially the guitar is intonated in the usual fashion, then once each saddle height is set they are individually locked. In the hollow centres of each saddle are the individual motorised gears.

In simple terms the mini hex pickup senses the pitch of each string and via some highly complex digital processing then tells the motorised gears how much they need to move to re-tune the guitar.

Aside from these two elements of the ATD system, the Super-Matic is a very regular electric guitar. The Korean-made model would effectively fit into Fret-King's Blue Label range (it's being marketed under its own guise, however) and without the ATD bits would retail, much like the Super 60HB at around £800.

Clearly the ATD system adds substantially to the overall cost of the instrument - as Wilkinson told us last month, you'll never see it on a £100 electric guitar!

Yet Fret-King's production quality is extremely high and the Super-Matic is a very clean guitar with a modern ergonomic design - a 24-fret neck, ample cutaways, rounded heel with inset neck screws, a clean uncomplicated rosewood fingerboard with simple dot inlays and a very mainstream 'C' profile neck shape that really won't offend anyone.

In fact, aside from the typically Wilkinson 'wiggle' to the outline of the scratchplate and, of course the neat Vari-coil control - the lower tone control that gradually splits the two 'buckers from full humbucking to single-coil - it could be seen as a little bland: stark contrast to its self-tuning heart.

Acoustically, there's plenty of Fender-like zing and ring to the guitar, indicating that the hi-tech bridge isn't impairing tone. Clean, it's bright-edged, more Fender-y than thicker, smoother Gibson and in full humbucker mode it's beefy and attacking, if lacking a little low-end depth.

The Vari-coil works well to progressively clean up the humbuckers to just one-coil, in which format we have quite a modern Strat feel. This hot-rod Fender vibe continues as we up the amp gain. At heavier gains that clarity works in your favour, but a little more mid-range would help.

To our ears it performs at its best with anything from clean to crunchier gains, which certainly suits the altered tuning potential.

Self-tuning operation is simple (there's also a chromatic tuner mode, handy for re-stringing and calibration). Hold down the grey OP button on the hex pickup momentarily until two green arrows light on the display and a number '1' appears.

You then cleanly strum across the strings and the ATD does its work (there's a rather reassuring sound of gears buzzing, but you'll need to turn off your volume to stop this being amplified).

When it's happy that the guitar is in tune, again, those two green arrows light and blink twice: job done. It obviously depends on how much you're out of tune as to how long the process takes.

Detuning each string a little (sharp and flat) it takes around 20 seconds from the moment you engage the process until the two green arrows flash that you're in tune. With just one string slightly out, for example, this tuning process time is halved.

Invariably ATD asks you to strum the strings a second time - indicated by the two flashing amber arrows - but ignore this prompt and let the unit shut off and we found we were still perfectly retuned and a few more seconds had been saved.

Irrelevant of the time, once ATD says the guitar is in tune, it really is. After tuning, we checked on our Peterson strobe - the digital display was perfectly stationary on each string, indicating extremely high pitch accuracy. But like the Robot system, you can do a lot more.

First off there are the five factory preset tunings. Each is accessed in the same way, though instead of selecting preset one you tap that grey button to move to another preset, strum the strings (again, usually twice) and let ATD do its work.

Again, the further the new tuning is from pitch the longer it takes. Both open G and DADGAD move the strings in total four tones down from standard and both take a similar time - around 23-25 seconds.

When you're waiting and watching it seems like quite a time, but plug into an electronic tuner and see how long it takes you to do the same. It's not much different and you're having to think what strings go where. It may be slower than the latest Robot system, but we found it more accurate and consistent.

We didn't touch the machine heads throughout our playing tests. Yes, there's a knack involved in getting to the right preset and it requires practise - and indeed this is the thing that might put many players off.

Restringing is different (but not difficult) - you need to calibrate the system if you change gauges. Loading in your own presets is a little convoluted too. In short, because all the ATD functions are accessed by that OP button, you have to carefully follow instructions - how long you hold it down and so on - to achieve success.

Not all of us will have the patience. Part of the ATD's potential will surely be for slide and bottleneck players who will already be familiar with altered tunings (and having to lug a couple of guitars to gigs).

Our pre-production Super-Matic precluded us from testing the potential here, but ATD insist that it can be successfully used with gauges up to .011-.052 (probably heavier). It also claims that via shims, which are available with the production units, you'll be able to raise the string height without increasing the saddle-to-motorised gear angle.

We'll have to take their word for that and as soon as we get a production version the folks at Guitarist will be taking it on Longterm Test to evaluate this side of the unit.

Spending time with this self-tuning bridge is essential to feel confident. But there's no doubt it works perfectly - switching between tunings is easily possible between songs, and the actual tuning accuracy is extremely accurate.

The ifs centre around its use with heavier than standard gauge strings and higher actions. If that can be successfully integrated, the ATD-loaded Super-Matic could well be the dream guitar altered tuning or slide players have been waiting for.

But even without that, the ability to quickly tune and re-tune without having to think about it (too much!) means that the world of alternate tunings has become a very usable, and not too expensive, reality.