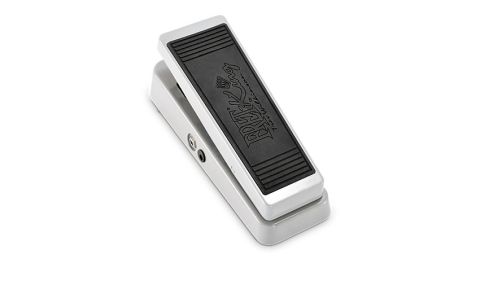 We've seen many attempts at 'improving' the humble wah pedal over the years but those original 60s designs are still the tonal benchmark. Fret-King's Trevor Wilkinson owns one of the first Vox wah pedals ever produced and has based this new pedal on that oldie.

He believes that a wah should be tuneful and not an exercise in seeing how much sweep you can get from one extreme of the treadle to the other - from muffled bass to piercing treble frequencies.

He's also of the mind that much of the tone is down to a halo inductor in the circuitry and has therefore incorporated one here, resulting in a pedal that retains the warmth of your tone while offering a smooth sweep across the frequencies.

If a retro-sounding wah pedal is what you need, you'll get it here but you don't have to put up with a retro feature set because this wah has a red LED to show that it is active and a flip-top battery compartment - meaning no more unscrewing those rubber feet...