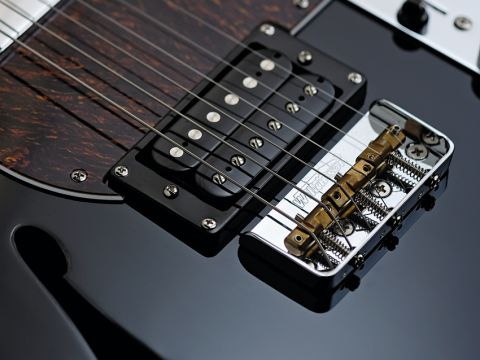 This cracking little tone machine doesn't conjure up the classic Tele bite, but the bulk of its sonic palette offers classic rock tones.

The outline of the Country Squire Semitone is about as groundbreaking as a bacon sandwich.

The single-cutaway, chambered body is textbook Californian-bred guitar pedigree, right down to the choice of American alder as a tonewood.

"The Semitone's bat-wing headstock looks great; the only one that would look better on this guitar is protected by copyright."

In classic Model T Ford-style, the Semitone is only available in a glossy black finish. While its f-hole and tortoiseshell add some eye candy, we wouldn't have minded seeing a few more squares on the colour chart.

Vintage geeks will have already twigged that the Semitone's slim bolt-on maple neck tapers to a cheeky cop of the 'bat-wing' headstock that beautified the Epiphone Coronet and Wilshire back in the '60s. It looks great; and the only headstock that would look better on this guitar is protected by copyright.

The Semitone's rosewood fingerboard comes with 22 medium jumbo frets and a radius of 254mm (10 inches). To put that in perspective, that's a little flatter than the 241mm (9.5 inches) seen on modern Fender Strats and Teles.

T-style bodies hot-rodded with humbucking pickups are nothing new. Fender has been pimping Teles in just that way since the early '70s.

The Semitone comes loaded with a vintage-voiced Wilkinson 'bucker at the neck and a higher output item in the bridge position. What adds a dash of intrigue on this guitar is the third knob on the control panel - the Vari-Coil.

Basically a coil-split, cranking the knob up unleashes each humbucker's full payload; winding the control down dials in single-coil tones. Continuing along the control plate takes you past the master volume, master tone and three-way pickup selector lever switch.

The Country Squire Semitone produces a decent selection of humbucking and single-coil tones. Its only slight drawback is that even in single-coil mode, the bridge pickup doesn't have the cutting tone that we expect from a great Tele; players looking for that sound would be better served with the real deal - or the Black Label JD Jerry Donahue.

The word on Wilkinson's humbuckers is good, and we're stunned by the Vari-Coil control. Sweeping through it shows how subtle the difference between the tonality and output of single-coil and humbucking pickups can be.

We like that a rolling coil-split control offers more sonic variation than a simple toggle switch. You might want to try this out: hit and sustain a note in the single-coil mode and gradually turn up the Vari-Coil to fatten the note as it begins to fade. It sounds great!

Some will dismiss the Black Label guitars as Wilkinson having his wicked way with some established classics. Yet the tonal range provided by the Vari-Coil control gives the Semitone a voice beyond the instrument that features so strongly in its DNA.

Whether that's what you want is open to question, but you should definitely give this guitar a try.