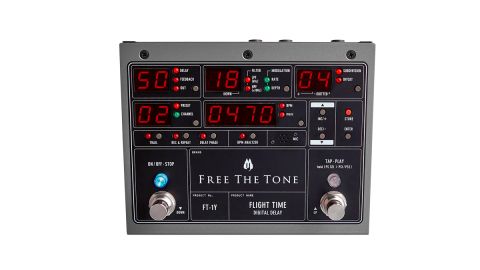 The Flight Time is an expensive professional's tool, but its onboard facilities include unique settings that some will find invaluable.

At first glance, the Flight Time's lack of knobs - plus a user interface that consists of several tiny buttons linked to numerical displays - may be disconcerting. However, it will seem familiar to anyone who's used a rackmount digital delay and it puts those capabilities into a pedal.

The FT's high-quality digital delay is provided by 32-bit high-precision DSP, and it sounds great. It is capable of delay times from just 1ms up to 9,999ms, and the possibilities - from chorusing onwards - are vast.

Delays can be setin milliseconds or beats per minute. Besides the delay time, there are a few other editable parameters including feedback, which can actually go up to110 per cent, something you'd need to keep a careful eye on if you value your speakers!

The repeats can be pristine copies of the input signal, but you can apply Hi-Pass and Low-Pass filters to them to respectively shave off some top end for a warmer vintage sound, or attenuate the low end.

You can also apply modulation with separate Rate and Depth parameters and turn on the Trail function, which leaves the repeats to die away after the effect is bypassed if you don't want them to just stop dead. Switching presets isn't something you'd want to be doing during a song - it involves holding down the Tap/Play footswitch for two seconds, using either footswitch to scroll to the wanted preset number, and then holding the footswitch down again for two seconds.

If two preset delays are all you need for a set, you can hold the footswitch down for four seconds to switch between presets 1 and 2.

Two features are claimed to be unique to the FT. One is a very useful delay offset that puts your delay slightly before or behind the bpm-set beat for either more urgency or a laid- back feel.

The other feature is the Realtime BPM Analyzer, which automatically resets your delay time if you've entered the delay with tap tempo but are slightly out with the music being played. A small mic on the pedal's top surface 'listens' to the performance and can adjust within +/-20 per cent of the tempo, which could be a face-saver if your drummer's having a bad night...