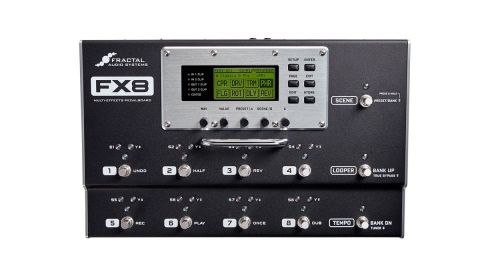 There are no compromises here: this is the most comprehensive and best-sounding all-in-one effects processor you can currently buy today.

Regular readers will be aware of Fractal Audio's Axe-FX range: high-end gear endorsed by numerous well-known names and offering modelled amps and effects in a rackmount unit that can be coupled to a floor controller.

The company became aware that many players have their own favourite amps, so while they don't need the amp sims, they may be interested in the effects - and this was the concept behind the new FX8: taking just the effects from the Axe-FX II and putting them into a floor unit that has a basic working format of a pedalboard with eight simultaneous, instantly available effects blocks, each home to an effect of your choice.

128 different preset pedalboards are stored onboard in banks of eight, and each preset has features that can go beyond just switching the individual effects on and off.

Featuring rock-solid construction, the FX8's rugged steel chassis, with its aircraft aluminium end-panels, is practically sized with a sloped top featuring footswitches in two tiers so that you can easily hit the right one without a problem.

Round the back, you'll find a comprehensive set of connections that allow the FX8 to be used in several different configurations. You can just plug the FX8 directly into your amp, of course, but there's also provision to have some of the FX8 effects in front of your amp and some in its FX loop, using the four-cable method with the unit's 'Pre' and 'Post' inputs and outputs; effects can be designated as Pre or Post within a preset. There are sockets to add footswitches or expression pedals, which can be assigned to effects and, furthermore, you get a pair of Relay sockets to take care of amp-channel switching duties from the FX8.

The eight footswitches that operate the effects blocks each have three LEDs, because they can have three different functions within any preset. A green LED lets you know which effects block is active or bypassed, but there is extra flexibility - each block can have X and Y settings (encompassing two different effects models or one model with different parameter values), changed by pressing and holding the footswitch, the Y setting signified by an amber LED.

Each preset can also have eight scenes, and the active scene is signified by a red LED. A scene can bring several of the effects, complete with their X and Y status, in at once with a single footswitch and can also store Relay status for amp switching (Relays can also be assigned as effects blocks to footswitches). A scene is called up by a quick press on the Scene footswitch at the top right followed by pressing one of the eight switches. Once a scene has been called up, the unit reverts to standard pedalboard mode.

Presets are selected by pressing and holding the Scene footswitch and then selecting one from the current bank withthe eight footswitches, or using the Bank Up and Bank Down footswitches to first select a new bank. There's also a looper (with a maximum loop time of eight minutes mono, four stereo) with every preset. Hitting the Looper footswitch assigns dedicated looper functions to seven footswitches.

Each block you choose to assign to the eight switches on your pedalboard offers a particular genre of effect such as chorus, reverb or drive - there are 21 to choose from, plus blocks that operate MIDI switching and the two Relay switchers.

You can then choose a specific effect for that block; the Drive block, for example, offers 33 options including modelled Tube Screamer, Fuzz Face, RAT and more. There are over 130 different effects in total to choose from and all have many editable parameters. Effects order is flexible and effects can be run in parallel as well as in series, so you can,for example, choose not to send your delay throughthe reverb.

Editing can be neatly accomplished from the FX8 front panel, but there's also a computer-based editor/librarian that makes setting up a doddle.

As with the Axe-FX II, sound quality is excellent, and with just about every effect you could possibly want, coupled with a plethora of routing options, there's huge sonic potential. While all that tap-dancing footswitching might seem complicated on paper, in practice, it's an easily managed, extremely flexible system for changing sounds on stage.