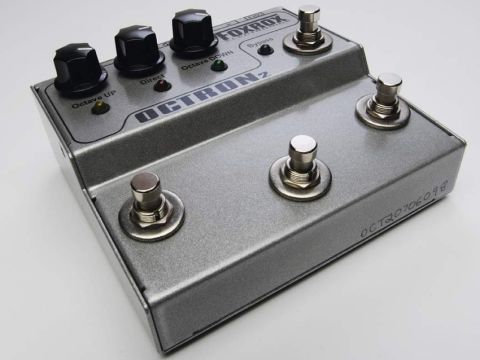 The Octron 2 may be a specialised piece of equipment, but if it's an up and down octave box you require then they don't come any better than this - just the thing for creative guitarists.

The Foxrox Octron 2 is a more versatile version of the New Jersey based company´s Octron pedal.

Both pedals sound exactly the same and provide, via three knobs, a blend of octave up, octave down and dry signal. However, where the Octron has a single footswitch, the Octron 2 has a master bypass plus individual footswitches for octave up, octave down and direct signals. It also has an effects loop so you can add, for example, a fuzz box that effectively works as an integral part of the pedal.

Totally responsive to your playing, the Octron 2 sounds really great and tracks very smoothly. With the lower octave cranked it sounds like guitar and bass in unison while the octave up effect thickens your tone and can really scream - particularly played way up the neck. The sounds don´t necessarily have to be monstrous though - there are plenty of more subtle blends available and loads of options for introducing them onstage with various switch combinations.