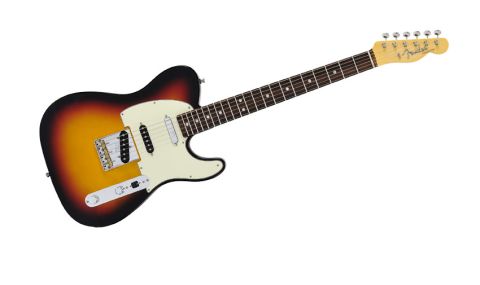 A well-sorted Tele with a mid-to-late 60s personality and plenty of sonic variations on that theme.

We take a look at one of Fender's revamped Vintage Hot Rod range of Telecasters - another marriage of new and old from the guitar giant.

Innovation in the world of the solidbody electric guitar tends to fare best when it arrives on the market with stealth. Perhaps it's because, compared with traditional orchestral instruments, our beloved plank is something of an infant, and there's still much to be said for the effectiveness of the first wave of designs in almost any modern musical context short of drop-tuned, bottom-heavy metal.

Or perhaps we guitarists are mostly backward-looking, curmudgeonly types. Either way, as much as we admire the style and form of the 1950s and 60s, when you take a guitar out into the real world, there are practicalities to consider.

For example, as much as the mere mention of Fender's American Vintage instruments unites the office in a collective swoon, we'd be forced to admit, somewhat grudgingly, that they are not for everyone. Such features as thin fretwire and 184mm (7.25-inch) fingerboard radii might be examples of FMIC's painstaking efforts to make 'em like they used to, but it's a combination that's not for the faint-hearted player when high-register lead breaks come around.

Recognising this, Fender launched its first Vintage Hot Rod guitars back at Winter NAMM 2007, and they immediately proved popular with players who, though still head over heels in love with the look and the sound of the company's golden era, find the slavish accuracy of the American Vintage reissues a little limiting.

Last year saw The Big F revamp the Vintage Hot Rod range and throw some new models into the mix, and now there's a choice of '50s and '60s Strats and Teles as well as '60s Precision and '70s Jazz Basses. All six models draw heavy inspiration from the decades in question, but feature a range of modern updates aimed at making them more practical for today's players.

Although vintage-style fingerboards are justifiably maligned for forcing setups to be a compromise when it comes to avoiding choking up at the dusty end, there's no denying that a 184mm (7.25-inch) 'board is very comfortable indeed when bashing out chords, especially if you are a thumb-over-the-top player.

As violin-makers will attest, compound or conical radius fingerboard shapes that flatten out as you get further up the neck are hardly a new idea, but it's certainly true that they are less common and trickier to execute on a mass-production scale. Like all of the new electrics in the Vintage Hot Rod range, our Telecasters has a 184 to 305mm (7.25 to 12 inches) compound radius 'board.

Tying in with the Hot Rod ethos, both this '60s model features electronic additions that expand upon the tonal palettes offered by traditionally appointed Teles. It immediately recalls Fender's various Nashville Telecaster designs thanks to the Texas Special middle pickup nestling between its Custom Shop Broadcaster bridge and Twisted Tele neck pickups.

For many purists, middle pickups on Telecasters are roughly as welcome as a fox in a hen house, but there's no denying that they add a variety of Strat-like shades to the palette in conjunction with a five-way selector. This Hot Rod model goes even further, with an S-1 switch integrated into the volume control that, when engaged, adds the bridge pickup to positions three, four and five.

Other features include a gloss nitrocellulose-finished body, satin nitro-finished neck with gloss headstock face, vintage-style locking Gotoh tuners and an American Vintage bridge with a trio of intonateable brass saddles.

Under the fingers, those compound radius 'board doesn't have an overly dramatic transition, but in combination with 21 of Fender's neatly installed 'narrow jumbo' frets, pleasingly low, bend-friendly actions are no chore to achieve and you still benefit from all of the good stuff down in the lower registers.

Thanks in part to the less brash nature of alder and rosewood, the '60s Hot Rod is less open- sounding than the recently reviewed Fender Vintage Hot Rod '50s Telecaster - it's rooted more firmly in the past somehow, and more enclosed tonally.

While the switching options deliver 60s twang in multiple shades, there's less sustain and a slightly uptight feel. This works well for explosive bursts of lead and Wilko Johnson-style stabs, but is less effective as an all-rounder.

The guitar didn't arrive in our preferred finish - the '60s model looks sensational in Olympic White - but we'll forgive Fender for reminding us for the umpteenth time what an outrageously versatile chassis the Telecaster is.

It's easy to hear how the array of cutting treble tones that the '60s Hot Rod offers could work well in a two-guitar band, especially one that takes its sonic inspiration from 1966. We'll admit that the retail price made us wince, but with this instrument seemingly available for around £1,500 in stores, it starts to look considerably more tempting.