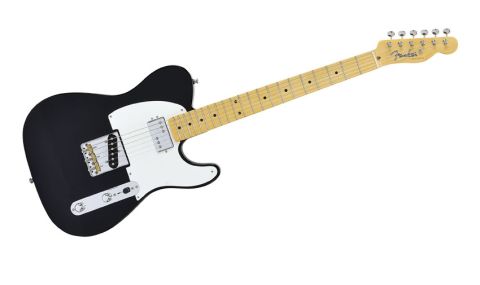 An excellent modern Tele with pro additions and plenty of 50s identity that could become your go-to electric.

The mere mention of Fender's American Vintage instruments unites the office in a collective swoon, but we'd be forced to admit, somewhat grudgingly, that they are not for everyone. Such features as thin fretwire and 184mm (7.25-inch) fingerboard radii might be examples of FMIC's painstaking efforts to make 'em like they used to, but it's a combination that's not for the faint-hearted player when high-register lead breaks come around.

Recognising this, Fender launched its first Vintage Hot Rod guitars back at Winter NAMM 2007, and they immediately proved popular with players who, though still head over heels in love with the look and the sound of the company's golden era, find the slavish accuracy of the American Vintage reissues a little limiting.

Last year saw The Big F revamp the Vintage Hot Rod range and throw some new models into the mix, and now there's a choice of '50s and '60s Strats and Teles as well as '60s Precision and '70s Jazz Basses. All six models draw heavy inspiration from the decades in question, but feature a range of modern updates aimed at making them more practical for today's players.

Although vintage-style fingerboards are justifiably maligned for forcing setups to be a compromise when it comes to avoiding choking up at the dusty end, there's no denying that a 184mm (7.25-inch) 'board is very comfortable indeed when bashing out chords, especially if you are a thumb-over-the-top player.

As violin-makers will attest, compound or conical radius fingerboard shapes that flatten out as you get further up the neck are hardly a new idea, but it's certainly true that they are less common and trickier to execute on a mass-production scale. Like all of the new electrics in the Vintage Hot Rod range, our Telecaster here has a 184 to 305mm (7.25 to 12 inches) compound radius 'board.

Tying in with the Hot Rod ethos, the '50s model features electronic additions that expand upon the tonal palettes offered by traditionally appointed Teles. 2007's Vintage Hot Rod '52 Telecaster featured a Seymour Duncan mini-humbucker in the neck position, but for its new '50s model here, Fender has opted for a Wide Range Special unit that, unlike its physically larger forbears, has standard PAF-style dimensions.

Meanwhile, in the bridge position, there's a Custom Shop Broadcaster pickup. A four-way lever selector switch offers both pickups in series in position four, on top of the neck, neck and bridge in parallel and bridge-only selections that we usually see.

Other features include gloss nitrocellulose-finished body, satin nitro-finished neck with gloss headstock face (the '50s model also sporting a gloss-finished 'board), vintage-style locking Gotoh tuners and an American Vintage bridge with a trio of intonateable brass saddles. Time to fire it up...

Telecasters retrofitted with neck humbuckers have been used to create some pretty stellar tones in the past - just ask Keef or Albert Collins - and the Vintage Hot Rod '50s Telecaster is no exception; just don't expect it to sound either like a PAF or the searing, slide-friendly Duncan mini-humbucker that graced the 2007 '52 Hot Rod model.

This Wide Range Special does a good job of replicating much of the flavour of the Seth Lover-designed units of the 1970s; it's smoky and a little flabby, with a soft, foggy high end that begs for jazzy chord voicings, spring reverb and smooth noodling.

Dial in a little more crunch to go with that reverb and there's an excellent garage-blues sound on tap that only improves when you bring the bridge pickup into the mix in series using position four on the switch.

The parallel twin-pickup mix in position two is where your Stones riffs live, while the Custom Shop Broadcaster unit in the bridge on its lonesome is about as classic an electric guitar sound as you are likely to hear. From Luther Perkins to Dave Davies, Graham Coxon and Roy Buchanan... the applications for its raunchy, stinging attack are endless.

Under the fingers, the compound radius 'board doesn't have an overly dramatic transition, but in combination with 21 of Fender's neatly installed 'narrow jumbo' frets, pleasingly low, bend-friendly actions are no chore to achieve and you still benefit from all of the good stuff down in the lower registers.

This '50s model is potentially the star of the new range. We'll admit that the retail prices made us wince, but with the instrument seemingly available for around £1,500 in stores, it starts to look considerably more tempting.