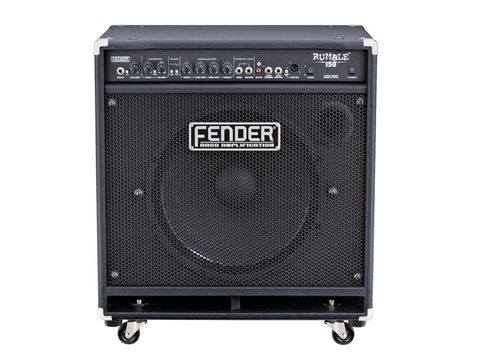 Equipped with a 15-inch speaker this performs well for any style. A compact, affordable, versatile combo for small gigs and practice.

Fender's Rumble Series of bass combos has been around (on and off) for some time, but never has the range been as appealing as now.

The front baffle is ported for maximum sound dispersal and it's designed as a workaday gigging unit or for practice sessions. The mains socket is at the rear, but all of the controls and connections are on the front panel.

The single input socket is provided with a -6dB switch making it suitable for either passive or active basses, while the EQ section features high and low mid controls, plus the usual bass and treble bands, and a lone volume control.

Extras include the shape feature, with two switches labelled punch and scoop, and an overdrive section with controls for gain and blend. Along with the on/off switch are extra sockets allowing input for CD/mp3, tape player or drum machine, a footswitch socket and a very handy headphone jack.

Manufactured in the Far East to keep costs down, the most important question is can it produce the classic Fender bass amp sound that we love? Well, yes, it can. This is partly due to the relative simplicity of the tonal circuit and its no-frills approach.

Using the four tone controls gives great variation, but the simple addition of the shape filter offers further enhancement and quality sounds. Scoop (as the name suggests) takes out the mid-range frequencies while boosting the high and low-end to give a tightly-focused funky sound.

Punch produces a rockier sound with high impact and delivery. With both activated you get a boost in note definition, but for more classic Fender sounds leave them both out and stick to those basic controls - it's particularly good in a studio environment as it allows your bass to retain its individual sonic characteristics.

The dedicated overdrive section gives you far more control over your distorted sounds. Whether you want the subtleties associated with a valve preamp for added warmth and colour or the angular blast of an overdriven hornet's nest of metal mayhem, the Rumble obliges.

It's not reliant on high volume levels, either, and can also be activated by a footswitch. Rated at 150 watts you'd expect this combo to be limited in performance ability but the clearly efficient design produces significant headroom.

With an active bass guitar, and the low-end of the Rumble wound to maximum, it certainly shifts air and the speaker handles the whole thing with confidence and clarity. It's hardly a sound that you would want to use often, but it demonstrates just how capable this unit actually is.

The switchable horn also performs exceptionally well and, although there's no level adjustment, it adds good projection to the top-end.

Well proportioned, easy to transport and with plenty of muscle, this could be your ideal gigging partner, even if the front panel with all its controls and connections does suggest that it's more of a dedicated practice combo.

But while we'd like to see some of those moved to the rear panel, it doesn't affect the performance in the least, this workaday combo is hard to fault. User friendly and with plenty of sound options it performs well on looks, practicality and power.