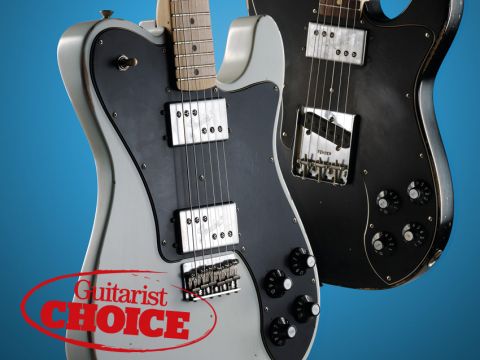 Quite simply one of the coolest and most versatile Teles around. Looks and feels ready for the road and takes no tonal prisoners.

The Fender Telecaster Deluxe and Telecaster Custom have certainly polarised opinion since their introduction almost 40 years ago, but regardless of what the history books say, both have become popular - Keith Richards, Buddy Guy and modern strummers such as Thom Yorke have all embraced either model at various times.

These days, seventies-era Deluxe and Custom models could hardly be any trendier, but procuring an original is far beyond many players' means. Furthermore, the build quality of seventies-made Fenders is notoriously inconsistent.

So, for 2010, albeit in limited numbers, Fender has added this pair to its Mexican-made and aged Road Worn series - guitars that boast very convincing aged finishes and hardware along with a few modern tweaks. Way cheaper than a real example or a Custom Shop imitation, Road Worns pack a huge bang for your buck.

On first inspection, any thoughts of corners being cut due to Mexican production are immediately dispelled. We're greeted here with subtle aging, a lightweight alder body that sings acoustically and an instant vintage vibe.

The thin Olympic white finish is gloss-less and almost translucent in places thanks to the lack of a primer basecoat. There are a handful of random scrapes and dings on the top and bottom edges, as well as convincing forearm wear and finish checking, but it's all historically sympathetic and looks about as cool and knackered as Keef himself.

The vintage feel continues as the neck displays some of the telltale signs of 30 years' playing. The fretboard's aging will seem a little formularised for some tastes, though the fret work is impressive, with each mirror-like fret expertly crowned and seated.

Unlike many originals that have a thick polyurethane finish, the one-piece 'C'-profile neck here has had its urethane finish stripped back to nearly bare maple. It gives us a wonderfully natural, played-in feel that allows your palm complete freedom to roam up and down the neck, lending itself to high octane rhythm playing.

Along with its standard 648mm scale we get a flatter 305mm (12- inch) fingerboard radius that creates a slinky, butter-like feel. If only all vintage samples played as well as this!

The aging on the plastic parts and hardware really adds to the vibe - there's ample 'grime' in the grooves of the skirted amp control knobs and the colouration of the three-ply 'guard looks as convincing as the real thing.

As is traditional on the Deluxe, Fender is using its new variants of the Wide Range humbucker - a well-liked pickup that was often let down in the past by the guitars on which it was used. These units fully equipped with tarnished covers and the occasional, well-placed ding.

Hear it in action alongside the Road Worn '72 Telecaster Custom:

The Deluxe has become a staple for a great swathe of alternative styles of music, mainly because it's one of Fender's most muscular sounding Teles. The bridge humbucker possesses a sweet and chewy mid-range married to a sparkly top-end with plenty of zing.

There's no soupy low-end like that of a Les Paul, but as a result the Deluxe sings with a modest amount of gain and really cuts through a mix without ever sounding, or feeling, overly glassy. It naturally lends itself towards a myriad rock and blues styles, from the Stones to edgy Biffy Clyro-type rock - it's all there under your fingers.

In contrast to the bridge, the neck and middle mixed positions offer a more considered PAF-like neck tone - its added warmth provides ample depth for bigger blues-rock solos while being delicate enough for soft picking accompaniments.

This guitar has an incredible vintage feel for way under half the price of an original. What's more, the build quality is exceptional - any remaining 'made in Mexico' prejudices are misplaced - Fender Japan diehards take note.

The Deluxe combines the great feel of an old Fender with the playability and tonal prowess of a modern Gibson: it's packed with PAF-like power and an underlying Fender spank that completes a highly versatile, highly playable package. What's not to like? We understand the numbers being made by Fender are strictly limited, so grab one while you can.