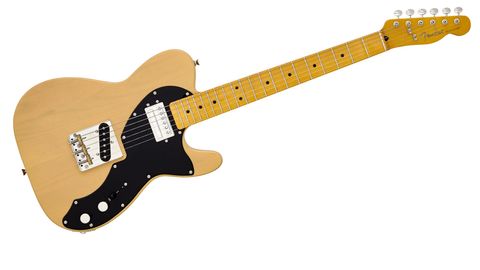 Super-light, super-resonant, super-priced. Small and well formed, this is a beginner's dream.

Here at the tail end of 2014, with miniaturisation abundant in the workshops of amplifier and effects pedal engineers the world over, perhaps we shouldn't be surprised to find The Big F taking a pillar of the electric guitar church and downsizing it in the form of the Modern Player Short Scale Telecaster.

From more than six feet up in the air, it's difficult for this writer's brain to relate to a scenario in which a regular Tele seems just too large and unwieldy. Yet for a player for whom the standard Gibson scale length of 624mm (24.6") is 'home', Fender's 648mm (25.5") can feel, initially at least, quite different - not least the added string tension.

So, the extra elasticity of a shorter scale length combined with traditional Fender appointments has its appeal. That said, a cursory glance at these two Chinese-made Modern Player instruments reveals much that's not so traditional.

The classic Telecaster outline is approximately 320mm at the widest point across the body, and 399mm straight down the centre from the edge of the neck join to the base of the strap pin.

The Modern Player Short Scale Telecaster - along with reducing the scale length to 610mm (24-inch) - shaves those dimensions down to 304mm and 379mm respectively. It doesn't sound like much - indeed it's only about a five per cent reduction in size in each direction - but it makes for a much more compact look and feel overall.

Another obvious departure from Leo's blueprint come in the shape of the Guild humbucker that is present in the Telecaster's neck position.

Though Fender's decision to incorporate a pickup branded with a marque that it has recently sold may seem a trifle odd, it wouldn't be the first time that the contents of a major manufacturer's parts bin have spawned a new model; Gibson's Les Paul Deluxe, for instance, arrived in 1968 as a means to utilise leftover Epiphone mini-humbuckers when the company moved Epi production to Japan.

The Modern Player appears to be exceedingly well-made for the money, with neat and tidy fretwork and - a loose pickup selector switch tip aside - a dependable, reliable feel straight out of the box that should cope admirably with whatever you throw at it, whether you are a young beginner or an experienced player of smaller stature.

Indeed, the lower string tension of a 610mm scale length - which will be abundantly familiar to Jaguar players - combined with comfortable Modern C neck profile and 241mm (9.5-imch) fingerboard radius make for a breezy, string bend-friendly playing experience, although the 'medium jumbo' frets are closer to medium-vintage as far as we're concerned.

This instrument would be fun to have knocking around in the corner of a living room for players of a larger stature, too, and it's been a long time since we've played a solidbody Fender that's weighed 6.5lbs or less - it's a real pleasure.

As you might expect, the Telecaster is a lively guitar acoustically-speaking, but plugging in reveals that, despite the reduction in size, there's no shortage of essential Tele DNA in the tones on offer here.

Players familiar with either a 70s Telecaster Custom or a Keith Richards-style 50s-spec Tele with a retrofit neck humbucker will be right at home with the Modern Player Short Scale Tele's tones.

An inch and a half less string length doesn't appear to inhibit the bridge pickup's essential bite and twang, brass saddles definitely help avert any unwanted spikiness and there's plenty of resonance and sustain.

Flip the three-way switch to the middle and a rich and fruity underbelly is introduced to the mix, which works rather well for - you guessed it - Stones-y R&B, roots and Americana, while the Guild neck humbucker alone has a slightly foggy tonality with a lovely edge of treble when you dig in hard; it's a really expressive voice for a slow blues.

It's become something of a guitar journalism cliché in recent years, but in terms of value for money and sheer choice, us guitarists have honestly never had it so good. If you discount its short scale and compact dimensions for a moment, the chief competition for this Modern Player comes from within the Fender fold itself, in the shape of the various Squier Vintage Modified models.

Where does that leave the Fender Modern Player Short Scale guitars? There's no disputing the fact that their scale length, compact dimensions and pickup configurations offer something new for Fender fans.

Although they are targeted at young learners and players of a smaller stature, if you can work within the limitations of 20 frets and don't mind their modest proportions, there's much to appreciate here for more experienced guitarists, too.