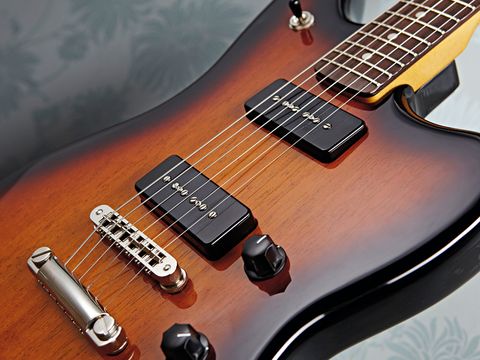 It's not the prettiest representative of the Jaguar family, but this Modern Player edition pumps out some great P-90 tones.

But don't take that to mean that there's not something interesting in the Modern Player range for you if you're one of the Fender faithful.

Winkling this latest Jaguar derivative from its cardboard box reveals a large CBS-era headstock, then a slim 'C' profile bolt-on maple neck, a rosewood fingerboard, a couple of P-90-style single-coil pickups, a tune-o-matic-style bridge and fixed tailpiece, a pair of Jazz bass knobs and then... a bloomin' Strat jackplate!

We'd love to get hold of the blighter at Fender who insists on putting Stratocaster jackplates on guitars that ain't Strats, and send them to bed without any supper. It just looks wrong on this guitar; like furry dice hanging from the rearview mirror of an E-Type Jaguar.

Some of you may argue that this stripped-down guitar isn't a true Jaguar anyway. We hear you; and the unconventional choice of a mahogany body, in place of traditional alder, confirms that you may well have a valid point.

Fender would likely respond that the guitar's unmistakable silhouette and short 610mm (24-inch) scale length make it a classic Jag to the bone. Plus, it has 'Jaguar' on the headstock. That seals the deal really.

Just remember that this is designed to appeal to Fender virgins, not purists.

Unlike the more esoteric Marauder, the Modern Player Jaguar offers no surprises at all. And that's a good thing. You get three fat-sounding P-90 tones that thrive on clean and overdriven settings.

This is not a guitar for the gain junkies and shredders among you, but it'll work for blues players, punks and just about anyone else.

Both of the Modern Player guitars offer excellent build quality and features at a low price point. The Jaguar for one is a good blues and classic rock machine that should appeal to all but the most staunch of Fender purists.