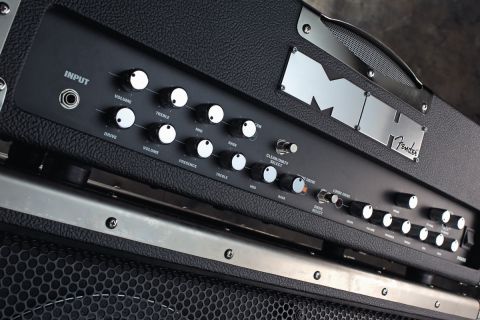 A truly loud amp but it's tone might not satisfy everyone.

The livery of Fender's new Metalhead - all black vinyl, flight-case fittings and chrome pots - leaves the casual observer in no doubt as to its primary function: to rock. And to do so at a volume that would blow the kneecaps clean off more staid players.

Even the accompanying literature features words such as 'assault', 'gut-wrenching' and 'heavy' to leave us in no doubt as to what we're dealing with.

It's usual for bass amps to have wattage in the high hundreds simply because of the headroom required, but guitarists can make do with anything between 50 and 100 watts for virtually any gig that's likely to come up.

When Fender says that you'll need the pack of 25 earplugs included with each MH-500, they aren't exaggerating.

The amp is 100 per cent solid-state and boasts a power amp stage that Fender makes no bones about telling us originates from amps such as the 400 Pro from the Pro Bass series.

Elsewhere proceedings are divided between three separate channels, each with a distinct voicing and, to this end, each offers its own EQ section, too.

It's to Fender's eternal credit that included in the amp's RRP is a sturdy four-way footswitch that allows you to select your chosen channel.

This also allows you to access the boost function, which hikes the volume of your selection to a level determined by the associated pot on the amp's front panel.

Its final function is to switch in or out one of 16 effects that the amp also includes. Selected via a rotary pot, the choice includes a number of reverbs, delays, choruses and flangers plus a phaser, vibrato and a gate that doubles as a noise reducer and automatic mute.

Loose Drive is voiced for producing the full gamut of classic and hard rock tones, while the Tight Drive channel is best suited for all manner of contemporary metal.

However, we'll begin with the clean channel as, in our experience, it's these tones that are best suited to solid-state amps.

Don't make the mistake of assuming that only hard-driving tones will benefit from the additional push afforded by a 412 cabinet: the clean tones here are as good as from any other Fender amp, classic or otherwise, and that's saying something.

The crystal-clear headroom afforded by the huge powerage is rounded out by the above-average performance of the closed-back cab that offers over 155 cubic litres of air to give a genuinely excellent clean tone.

By using the Loose Drive channel you'll transform into the loudest, filthiest metal player at the merest flick of the four-way switch.

Both Fender and ourselves strongly recommend that you ensure all three channels' volumes are wound off before turning the amp on to avoid any cardiac problems, but by dialling in around 60 per cent drive and setting the EQ pretty much flat, you're faced with a crushing contemporary metal tone of mammoth proportions.

It's loud (no surprise there!) but, as with the clean option, the headroom is truly vertigo-inducing and could well be slightly unnerving to players not used to such power.

In comparison, the Tight Drive channel is slightly disappointing. It offers a rather subdued classic rock tone without any of the sparkle we would have liked: adding more presence and treble simply made proceedings shriller.

The versatility offered by any amp is usually greatly improved by the provision of any sort of boost function and, as this Fender is a solid-state affair, the feature here doesn't alter your tone at all: it merely makes it louder and is perfect for hiking the output for solos.

Choosing between the 16 effects can be a conundrum as there's no way of changing them other than fumbling with the rotary control.

That said, each of the 16 options are excellent, ranging from adding polish to your clean sound to over-the-top jet flanging courtesy of Flanger 2.

Again, the footswitch gives access and we'd suggest picking an effect that doesn't reside on your FX board - the Vibratone maybe - and using as required.

While on the subject of the effects, we tried to set the noise gate to allow us to pull off efficient muting, as Fender suggests, with only limited success.

The idea does work to a certain extent, but as the gate isn't adjustable we found its sensitivity tended to detrimentally cut notes off.

We would say that, compared to the all-valve metal head and cab array that we tested the MH-500 against, the tone isn't quite as rich, but what you lose here you gain in the wallet - swings and roundabouts in other words.