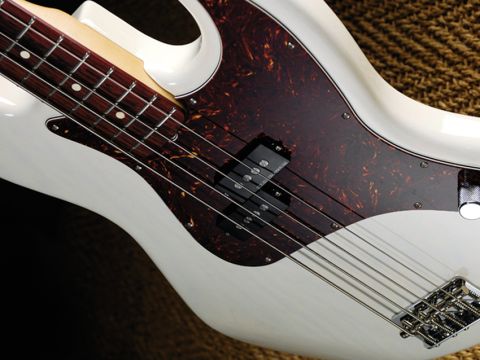 A breath of fresh air for rock bassists, the Hoppus has retro style and a thumpingly strong sound. Play it loud.

Although the Precision was the first electric bass guitar designed by Leo Fender, for many it was his second bass design that fully captured the imagination.

Originally publicised as the 'two-pickup Precision' it was in fact everything but. Compared to the Precision's split-coil pickup, the matched pair of single-coils on the Jazz seemed rather narrow and, with an offset body and an ultra-slim neck (which was supposed to appeal to guitarists), the Jazz looked and felt entirely different to its predecessor. And just as importantly, it sounded very different too.

Few players today are unaware of the magical properties that two identical pickups produce on a bass as they are gradually blended together, and that has become the main attraction of the Jazz for many a bassist.

But there is also something special about the overall proportions of the instrument that give it a highly specialised feel, and it's important that this element is maintained in all variations of this model.

It's this feel that's apparent in the single-pickup Hoppus bass, as the offset Jazz body presents the instrument to the player in a subtly different way than the Precision.

But this is still a highly individualistic instrument with hybrid ambitions and simplistic circuitry. The bass also employs through-body stringing. Now, as many players prefer this (and bearing in mind that the associated bridge allows for both this method and top-mounted stringing), we're curious as to why Fender bothers to still produce top-mount designs on new or upgraded models?

Mark Hoppus made his name with Blink-182 and inspired many a teenager to pick up a bass during the pop-punk heyday of the early 2000s. This hybrid Jazz/Precision - which has seen several different iterations now - reflects that freshness, although it's quite a curious piece.

Is it a retro Jazz design, or a Precision with a Jazz body? It was originally introduced in 2002 as a Jazz Bass, but checking the designation on this headstock, Fender now regards this upgraded version as a Precision - and in reality it has far more in common with that design.

It still retains a stripped-down vibe, however, as the single split-coil pickup has just a volume and no tone.

The rosewood fingerboard and tortoiseshell all-in-one scratchplate is a cool combination and definitely adds to the distinctive look of this upgraded design. The body is ash, while the neck is the same as a standard P-Bass neck, which is somewhat keener in the key dimensions than earlier Precisions.

More importantly the split-coil pickup is reversed, which makes a bigger difference than you might expect.

This is a curious beast indeed. It sits very much in its own little parallel universe where everything looks normal, but in fact is slightly out of phase with what we've come to expect.

So, with just this single volume control on board, what you're really getting is a P-Bass with the tone set on full treble plus a tad more, as there's none of the resistance caused by the tone control itself!

Being a passive circuit, there is a very slight mellowing of the tone when you reduce the volume, but you need a pretty keen ear to be truly aware of it. The through-body stringing also serves to absorb some of the warmth of the ash body and enhance sustain and resonance.

So what are the benefits of reversing the pickup? Well, originally it was designed to deliver even output across all four strings and so had a degree of compensation built in. Placed this way round it accentuates the strings differently, so expect to hear more thump from the top strings and a harder attack from the lower.

Also the strings really sing out and shimmer with clarity, and without a tone control the delivery takes no prisoners. It's a little edgier than the sounds you would normally associate with this classic pickup. If you happen to play slap bass style then you definitely get more bang for your buck.

Wind the bridge pickup and the tone control right up and back off the neck pickup completely and it produces a good sound, but lacks some output and 'singing' quality. This is less noticeable in the studio, perhaps, but on stage it's a very different story.

The Hoppus essentially has just one sound, but it's a cracker - think John Entwhistle, Chris Squire and and Hoppus/Blink-182, of course!

The Mark Hoppus Signature is a fine Fender bass with its own identity and sound that breaks with tradition. It's an unruly, punky brat that stamps its foot and demands its own way. Yet you can't help but love the little chap and its big, alternative sound that, while lacking in tonal variety, does what it says on the tin without fuss.