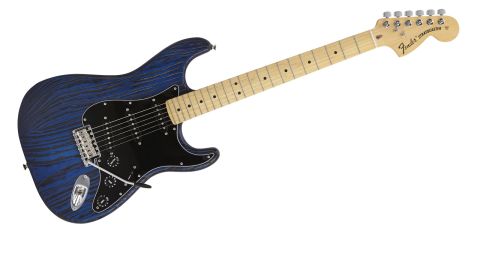 Some won't get past the finish, but this resonant axe has some usable tones.

Seeing Fender's Limited Edition Sandblasted Strat's ash body on the page doesn't fully prepare you for the heavily textured feel of the finish treatment in the flesh, as it were. In order to create this effect, a transparent urethane paint is applied, then sandblasted, leaving grooves in the grain behind, in which a black filler coat is visible.

Obviously, due to the natural variance in ash, no two instruments will have the same grain pattern. It's similar to a finish we've seen on Jens Ritter's high-end basses, but it's certainly uncommon in the mainstream world inhabited by the Fender Stratocaster.

It'll make purists shudder, for sure - it even raised eyebrows in the jazz-fusion corner of the office - but there's hardly a shortage of Strats in more conventional finishes, should your tastes be more traditional.

Aside from that, the Sandblasted Strat has a lovely, light weight and features a modern C shape neck profile that, while lacking in vintage character, provides a neutral platform for a variety of styles, particularly in combination with the 241mm (9.5-inch) fingerboard radius and jumbo frets.

Interestingly, this guitar comes loaded with American Standard single-coil pickups, despite the fact that since 2012 these units have been superseded by Custom Shop Fat '50s pickups on the American Standard guitars themselves.

The rear, 'no-load' tone control for the middle and bridge pickups bypasses the tone control circuitry when wide open, and wound down should provide a useful way to tame any excess treble you might expect to encounter when using the bridge pickup of a maple fingerboard, ash-body Strat.

At the time of writing, this instrument was available from several retailers with a street price of just under a grand. As a result, we're a little disappointed that, as per the substantially more affordable, Mexican-made Classic Series models, Fender supplies a Deluxe gigbag rather than a hard shell case in which to transport your instrument.

Compared to the recent Limited Edition American Standard Strat with Rosewood Neck that we have on hand, the ash body and maple neck of the Sandblasted Strat, provides a somewhat predictable hike in the amount of treble and a little less sophistication and depth as we move through the tones on offer from the American Standard pickups.

They aren't bad tones by any means, though, and there's plenty of scope for this instrument's cutting, percussive character in reggae, funk and 60s pop contexts. Whether or not it has the right aesthetic for those genres, however, is another question entirely and we reckon the the Sandblasted Strat's looks will undoubtedly limit its appeal.