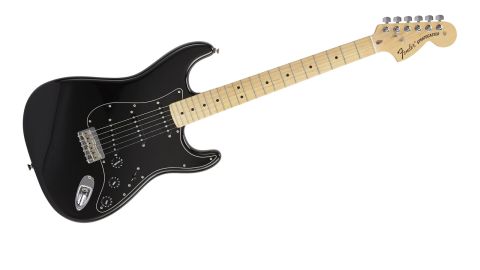 A dark horse that we like a great deal, just don't expect vintage accuracy.

The other models in Fender's American Vintage series zero in on specific model years, and an overhaul in 2012 saw the company track down vintage examples, restore original tooling dies, reformulate vintage colours and much more in the name of vintage accuracy. This 70s Hardtail Strat is a different animal altogether, and feels more like a nod to an era rather than an attempt to create a period-correct replica.

Roughly half the price of the other Strats in the American Vintage series, you get a Deluxe gigbag rather than a hard case and - big headstock, black scratchplate and a trio of American Vintage '70s Strat Single-Coil pickups aside - there are plenty of features here that deviate from the period.

Of course, that isn't necessarily a bad thing; though we've played some very good examples from the early part of the decade, we've also had experience of some Fenders from the tail end of the 70s that might be better used as a ship's anchor than a musical instrument. Shockingly, not every vintage guitar is a classic!

Back in 2015, Fender's 70s Hardtail finds itself equipped with a satin urethane (rather than high-gloss-finished) maple neck, with a modern C profile. Unlike the other American Vintage models, there's no nitro finish, but then there wouldn't have been in the 1970s either.

There's no truss-rod 'bullet', a four-bolt neck rather than three, contemporary sealed tuners instead of the 70s F-stamped units, dual 'T' Roller string trees rather than butterflies... you get the picture.

To all intents and purposes, this is a contemporary hardtail Strat with a 70s flavour rather than a slavish reissue, and many players will find it all the better for it.

Received wisdom suggests that overtones from vibrato springs are part of a Stratocaster's sonic signature, and it's certainly true that their absence, in combination with the additional body mass behind the bridge that comes with the lack of a vibrato rout, has a subtle influence on any hardtail Strat's tonality.

It's definitely the case here, too, although there's absolutely no doubt that it's a Strat you are listening to, and one with a nice medium-vintage output and a direct, choppy attack that's as usable for Nile Rodgers-isms as it is Texas blues.

The '70s Hardtail's all-black cosmetics and lack of vibrato contribute to a stripped-down utilitarian vibe that helps make it an excellent no-nonsense rhythm machine that's very keenly-priced for an American Vintage series model, averaging at around £750 street at the time of writing.

Given the American Vintage models are so specific elsewhere, its position in the catalogue is a little confusing, but it's a cool guitar nonetheless.