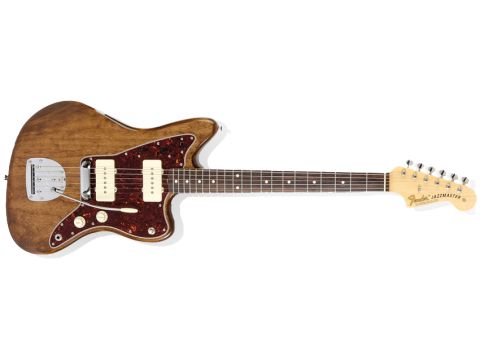 If the Classic Players can be considered quite forward looking in Fender's ultra-conservative world, the Elvis Costello Jazzmaster is a slice of nostalgia - more of a 'Tribute' model but in the standard signature range so it's far from the £9k price of, for example, Andy Summers' Tribute Tele of 2007.

But like Summers' instrument, this Jazzmaster has been fundamental to Costello's career right from the recording of his first album, My Aim Is True.

"I started recording that album with a CBS-era Telecaster," recounts Costello. A friend, a previous drummer, had worked for Fender so could get a company discount. The new Tele was, reckons Costello, "set-up like

a Dobro" but he naively didn't realise it could be changed and just thought he was unlucky. As such he played the guitar, without a set-up, for a couple of years - including the first sessions for My Aim Is True.

Back in Hounslow, where he lived at the time, Costello walked past a shop window that had a Jazzmaster in it. "I'd never seen one before; it kinda looked like a Strat someone had cut a bit off.

I didn't even know the guitar existed." So he traded in his Tele for the Jazzmaster. "I think I'd seen one other guy playing one," he remembers, "Danny Adler of Roogalator." Costello's new squeeze came with a DIY refinish, a "home furniture varnish like you would have on your auntie's footstool. That's the guitar onMy Aim Is True."

Later he had it professionally refinished, in LA, in a "not entirely attractive grey finish and put my name up the neck 'cos I was always into country and western-style guitar gimmicks. And I figured no one would nick it then, it'd be useless to them."

Costello doesn't say how he adjusted from the compact simplicity of the Telecaster to the much bulkier Jazzmaster. For example, if a Strat measures some 980mm from the tip of its headstock to its base, the Jazzmaster is approximately 70mm longer at 1,050mm.

The body itself isn't that much bigger but the waist is broader. From a player's viewpoint the differences are more dramatic. Seated, with the treble side waist on your leg, a Strat's 12th fret position feels like home.

Swap to the Jazzmaster and that 'home' position is more like the 16th fret and the Strat's nut coincides with the 2nd fret on the Jazzmaster: in short, the neck sticks out a lot more! Strapped on the differences are marginally less but still very noticeable. The Jaguar is about 25mm shorter than the Jazzmaster.

According to Fender: "Uniquely Costello-inspired features include a post-1968 neck design, a walnut stain finish and a tremolo with easier and greater travel, essential for that Watching The Detectives tone, or what Costello calls the "spy movie sound".

Those features aside, the Costello is a very close cousin of the American Vintage '62 so we get an old style 7.25-inch fingerboard radius, small frets (approximately 2.1mm x 0.9mm), and the original positioning of the vibrato with a push-in, as opposed to screw-in, arm.

There's no modern tune-o-matic-type bridge, instead we have the original, which holds six threaded-rod saddles - adjustable for height and intonation - in a 'U' shaped base.

Its two legs fit, sloppily, into body inserts - each with a conical base. Running through each leg is a small diameter screw with a pointed end which locates into the base of the leg and acts like a pivot point: as you down-bend the vibrato the bridge moves forward with the strings.

Set correctly it works fine, but the shallow string back-angle behind the bridge means that the strings can easily move or pop off their saddles and vigorous use doesn't always return the vibrato's bridge to the same position.

"The internal tremolo spring is set looser," says Fender's marketing director of electric guitars, Justin Norvell, "the arm is bent out from the body more, to allow a more Bigsby-like feel."

Pickups here are as per the American Vintage '62 reissue and electronically, of course, the Jazzmaster really was very different to the Strat in that it offered two control circuits: 'lead' and 'rhythm'. The lead circuit consists of a well-placed volume and tone control and three-way toggle switch on the lower horn.

A small slide switch, in about the same position as a Les Paul pickup selector, switches from lead to rhythm: just the neck pickup and a roller volume and tone. Simple.

This Jazzmaster kicks out a low output, very classic sixties vibe, excelling at ringing clean and clear tones with archetypical Fender-like percussive clarity. Less characterful than either a good Strat or Tele. A little smoother and wider sounding perhaps.

The bridge pickup can be excessively attacking and 'sizzly'; the neck pickup retains the bite but adds more depth while the mixed pickup is jangle heaven. Oh, and there's the hum - only in mixed position is it hum-cancelling.

The Costello sounds, obviously, very similar. It is a little woodier overall with a little more firmness to the sound. "The pickups are stock '62s - the woodier tone probably comes from the fact that there's less paint or finish on the body, so there is improved resonance," agrees Norvell.

It still has the stinging highs, but as a rhythm guitar you certainly begin to hear what Costello loves about the guitar: "This is a brutalsounding guitar. It suits the way I play… and I've just always stuck with it; I always come back to it.

I've done all sorts of different music, but whenever it's involved electric guitar, I don't think there's one record I've made on which the Jazzmaster doesn't feature somewhere."

Certainly with a slightly crunchy amp it really is percussive - like hitting a wood marimba with metal hammers. The rhythm circuit is simply the neck pickup with a preset tone roll-off - like if you voice the neck pickup in the lead circuit and wind down the tone control to around three.

With clean sounds, well, it sounds rounded and mellow - a sound that many would say is jazzy - but up the amp gain considerably and we're into 'woman' tone territory: Santana-y, Clapton-y, though we're wishing we had bigger frets to bend on. For sure, like an archtop, there is less sustain here.

Some might describe it as a little plunky, but in a rock 'n' roll context it works in the guitar's favour for snarly leads that you have to work to evoke. The volume control acts like a subtle tone control; a slight roll off noticeably reduces high end.

Yet for all its quirks, and despite the extra length and bulk, the Costello soon edges a way into our heart, especially bringing the vibrato into play.

'Spy movie' or not, the light, loose feel with some gained amp tones begins to make sense. Turn down the rhythm circuit volume and the rhythm/lead circuit switch becomes a modern day 'kill switch'.

The headstock logo is different from the '62 reissue - "a later period logo on the headstock which we've never done before," says Norvell - while Costello's signature is discreetly placed on the back of the headstock.

Of course, there's the guitar's finish that replicates the original's DIY job: stripped, sanded, brown-stained then sealed. Here it's a little posher than Costello's original would have been as we get a nitro-cellulose gloss finish over the brown stain.

The twin-humbucking version cures the hum and delivers a more mainstream sound but it's still that scale length. We can't help thinking that a dual-humbucker Jazzmaster might have more legs…

The Costello is basically just an American Vintage '62 Jazzmaster with different finish and slightly altered vibrato feel yet still with many of the original quirks that, for many of us, could be annoying.

That said we prefer the sound over the regular reissue model although, obviously, not everyone is going to think brown is a cool colour.

And there is a little foot-shooting here too. The difference in feel, build quality and sound between the USA models and the Mexican-made Classic Players doesn't, in our opinion, warrant the over 100 per cent price difference.

These Mexican guitars might not use a nitrocellulose finish but they really are very, very good for the price.