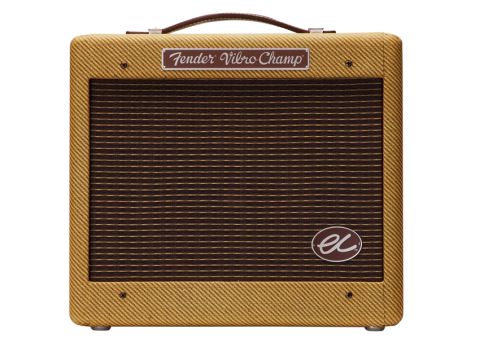 Like most signature models it's mostly for the fans - but worth a look if you're a wealthy bluesman.

Practically every amp and guitar manufacturer has at least one artist signature model in their catalogue these days; it's a tried and tested aid to selling the products. However, it wasn't always the case for Fender.

Although there were many artist endorsement campaigns linked to specific instruments, such as the so-called Mary Kaye Stratocaster, there were no artist signature guitars until the arrival of the first Eric Clapton Stratocaster in 1988. Even more surprising, when you remember Fender was building amps long before it built guitars, is that there's never been a Fender artist signature amplifier.

Until now, that is. It's fitting and appropriate that the first artist to be honoured with a Fender signature guitar should also be the first to have a Fender signature amplifier to go with it; so we're delighted to be looking at two of the new EC Series amplifiers - the Twinolux and Vibro-Champ.

Both amps are inspired by original Fender circuits going back to the famous 'Tweed' era of the 1950s, although they're new designs, created and tweaked to suit Eric's exacting specifications. Outwardly, all the features you'd expect to see on a vintage 'Tweed' amp are present: finger-jointed pine cabinet, brown/gold grille cloth, chrome steel chassis with chickenhead knobs that go to 12 (which is, of course, one more than 11) and a bright red jewel indicator light.

The tweed rear panels are immovable solid timber rather than the bendy hardboard still applied to lesser models. Behind them, the electronics are hand-wired using the traditional Fender eyelet board method.

An eyelet board is a piece of vulcanised fibreboard or other insulating material, with small brass or nickel rivets punched into it to hold wires and component leads. Offering greater freedom for component placing (which can have a dramatic effect in a valve audio circuit), eyelet boards are more popular in the USA, while in the UK and Europe traditional amp building is more often done using turret boards.

Component quality is top class throughout, with heavy-duty transformers and switchgear, connected by extremely neat wiring.

The Vibro-Champ features a single Weber eight-inch unit and exudes the class and mojo you'd expect from a top of the range Custom Shop product, with neatly cut and applied tweed, carefully aligned grille cloths, sharply defined radiuses to the corners and correct period-look fittings. It looks - and is - very expensive, with the capacity to handle endless professional touring.

Unlike the Twinolux, the Vibro-Champ's name isn't new - the original 'Blackface' version dates back to the early 1960s, recently reissued as the Vibro-Champ XD.

The EC version is very different from either of its namesakes, occupying the same small cabinet of the earlier 'Tweed' Champ and using a single 6V6 output valve to push around five watts into an eight-inch Weber driver.

There are high and low gain input jacks, with just two rotary controls for volume and speed for the built-in tremolo. On this amp, there's no effect footswitch or intensity control, the tremolo is switched on the pot. Finally, there's a high/low output switch that reduces power down to around two watts.

Nearly half a century down the road, it's worth remembering the profound impact Eric Clapton had on the electric guitar world following his 1966 appearance on the infamous John Mayall 'Beano' album. At that time, two of the most well-known and influential electric guitarists in the UK were Hank B Marvin and Bert Weedon, both great players, but about as far removed from electric blues as possible.

Eric's soaring, fluid pentatonic improvisations, characterised by heavy amp distortion and a singing tremolo, were a turning point in the instrument's development and a milestone in music history. On that single album, Clapton essentially wrote the blueprint for what would become classic rock guitar over the next decade, blazing the trail for just about every other guitar hero who followed him.

During his career, Eric has used all kinds of guitar/amp combinations, but post-Cream it's arguably the Stratocaster teamed with an old 'Tweed' Champ that together have provided some of his most memorable recorded tones and solos. Listen to the milestone Derek And The Dominos album Layla And Other Assorted Love Songs or the best-selling 461 Ocean Boulevard to hear what we mean.

Handed the opportunity of using not only Eric's amps, but also a loaned Clapton Strat, we couldn't help but dig out those classics and try re-creating the sounds on songs such as Layla and Motherless Children, as well as more modern cuts such as Run Back To Your Side from Eric's most recent eponymous album.

It turns out to be remarkably easy - the Vibro-Champ does a great job of producing singing, higher gain sustained leads, especially when using the Strat's mid-boost circuit. There's very little headroom though, so recording cleaner sounds is tricky, as background noise can creep in.

Like all pure valve circuits, the Vibro-Champ is very responsive; distortion starts at around four on the volume control with regular low-ish output single-coils, and earlier if you use higher output pickups.

As well as the Clapton Strat, we tried the Vibro-Champ out with Fender's superlative Custom Shop Nocaster and a Gibson Les Paul, and found it difficult to get any kind of a decent clean sound with either guitar, but for overdriven solos all three sounded great.

The Vibro-Champ's eight-inch Weber speaker compresses the frequency range, reducing highs and lows and making the little combo very easy to record - close mic'd and with a second microphone feeding in some hard natural ambience from a tiled bathroom or a utility room it sounds huge, sagging like crazy as the rectifier valve tries to keep up with the attack on each note and producing a great tone for classic rock or blues.

It's often the case that a signature amp designed to one person's specs can be a bit unforgiving; the Vibro-Champ has some of that, as does the Twinolux - and we're guessing the Tremolux (the mid-sized third combo in the range) does too.

However, used for hard-hitting electric blues it sounds superb; there's that edgy Tweed aggression teamed with an organic response that makes both a delight to play, the Clapton Strat just edging it over the Nocaster's awesome bridge pickup as the perfect six-string partner in our test.

Value for money is a tricky subject; aimed primarily at Clapton fans and collectors, this is very expensive even by Custom Shop standards, although street prices may be more sensible, letting it just make it into the 'okay' value for money marks. Let's not forget, this is a top of the range Custom Shop product and the build quality and tone is definitely right up there where it should be at this level.

For those who seek the full-on Tweed experience but don't need the Clapton kudos, the EC series has stiff competition from both sides of the Atlantic, although none will have two of the biggest names in electric guitar on the cabinet! Ultimately, if using Clapton's rig is your dream, nothing apart from cold hard cash is likely to come between you and owning one of these superb amps.